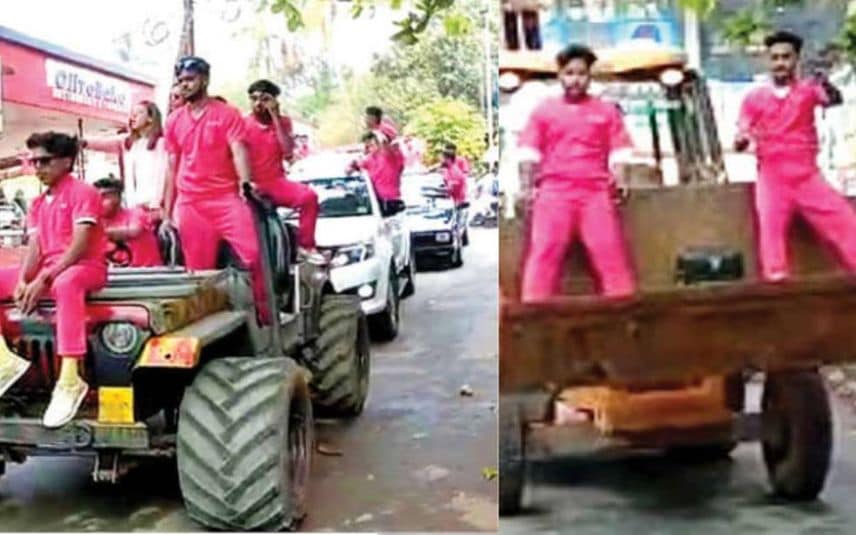 Mukkom: The students of MES Arts College at Kalanthode in Mukkam, Kozhikode conducted roadshows on a backhoe loader and modified vehicles during the college day celebrations. Some of the students were found travelling dangerously on the bucket of the vehicle.

When the roadshow conducted on Thursday morning turned a controversy, officials of the Motor Vehicle Department arrived and registered case against the students. The officials informed that the backhoe loader has been seized and cases registered against the modified jeep and other vehicles used by the students. Similar incidents had happened in other three schools and colleges of the district on the same day.

Students were tightly packed in the cars that followed the backhoe loader. Many students were spotted travelling sitting on the doors with the upper part of the body outside the cars. The glasses were found lowered.

Police said that most of the vehicles were taken for rent or borrowed and they are probing to find the real owners.

When the locals questioned on seeing students standing on the front bucket of the backhoe loader, the driver told them to do whatever they like.

The regional transport officer PR Sumesh asserted that the licence of the students who drove vehicles unsafely will be suspended and cases registered against parents of those students who have no licence.

Car-bike accident amid stunts displayed by Plus Two students on farewell in Kozhikode, See video