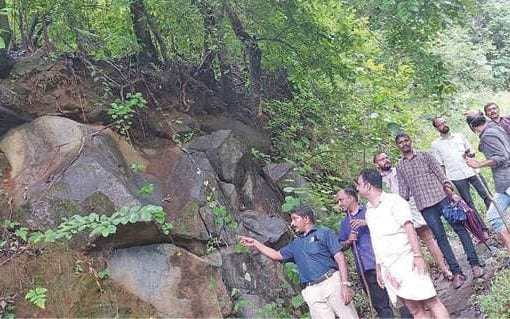 Valayam: An expert team from the Centre for Water Resource Development and Management (CWRDM) cautioned the possibility of intense natural calamity in the hilly regions of Chekkiyad and Valayam after inspecting several regions of the grama panchayats. Following a detailed study, the team under Dr Arun informed that the unusual cracks found in the Kandivathukkal, Aayod, Chittari and Edappakkavu hills have the potential to cause destructive mudslides.

Valayam grama panchayat is located 650 metres above the sea level. The report noted that heavy rainfall in the region may result in water draining through the cracks spotted in the hills here which can cause threat to the lives of people residing in the locality. If any disaster happens in the fourth ward of the panchayat, it may also hit the adjacent areas of Vanimel and Chekkiyad. The scientists who visited the region recommended the natives to be cautious, especially if red, orange and yellow alerts were issued. The team also suggested relocating people when incessant rainfall is reported in the locality.

Dr Arun said that those who live near the banks of rivers and streams also have to be vigilant.

This is what public schools should be like, shows Karaparamba GHSS in Kozhikode

Boy on cycle speeds up to capture Mammootty’s video, fans spellbound by ...