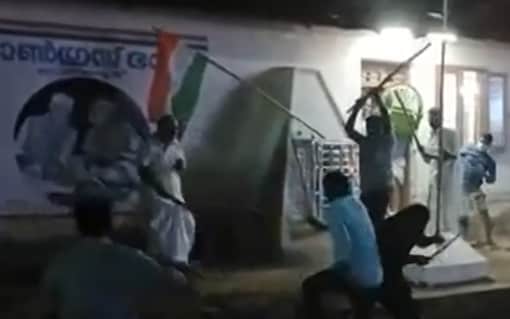 Solomon has been charged for destroying Congress office and attacking cops. He was arrested but let off on station bail. Apart from Solomon, five Congress workers including DCC secretary of Charummoodu panchayat were also arrested.

Meanwhile, four CPI men are already in custody. The total number of people arrested so far has touched 18.

All accused were slapped with criminal charges. However, they are charged under sections where station bail is enough for release.

Earlier, the police had registered case against persons in both camps. The clash erupted the other day after CPM workers erected flagpole in front of Congress block committee office. Congress workers removed the pole but CPM workers once again erected it. The members of both camp had heated exchanges and issued threats.

Authorities of Revenue Divisional Office intervened to remove the flagpole but CPM workers were not ready.

By evening the matter escalated and ended up in clash. Around 25 persons including cops were injured.