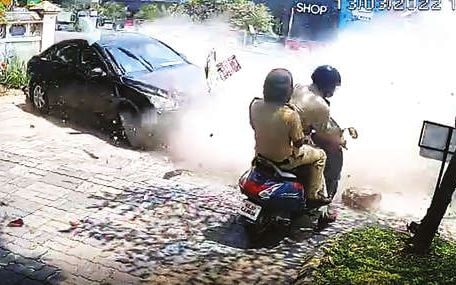 Kakkanad: CCTV visuals of two police officers narrowly escaping a speeding car that lost control went viral on social media. The policemen were passing by the Kakkanad- Infopark road on Sunday noon when the accident happened.

The car which hit and smashed the scooters and interlock blocks stopped after it collided with a wall. There were three passengers in the car. Sreelesh (23) and Sreekuttan (25) were severely injured and one of them underwent an emergency surgery. Vivek, who was behind the wheels, escaped without any injuries.

Police officers VN Selvaraj and KP Vinu of Infopark station were assigned to collect the CCTV footage of an accident that happened here earlier and reached the Carnival Infopark. The officers were returning to the station on a scooter when the car lost control and sped in front of them. The officers narrowly escaped from the mishap. Selvaraj sustained minor injury caused by a piece of broken interlock.

Though they were taken aback by the unexpected incident, the police officers and the security officer of the Infopark helped the youth get out of the car. They took the three to a nearby hospital.

Police registered a case against the passengers for overspeeding. Vehicles parked on the parking area of the Carnival complex suffered major damages.