After the Police Association filed a complaint against the request, the Cochin Devaswom Board corrected the letter and sent a new one without mentioning religion. 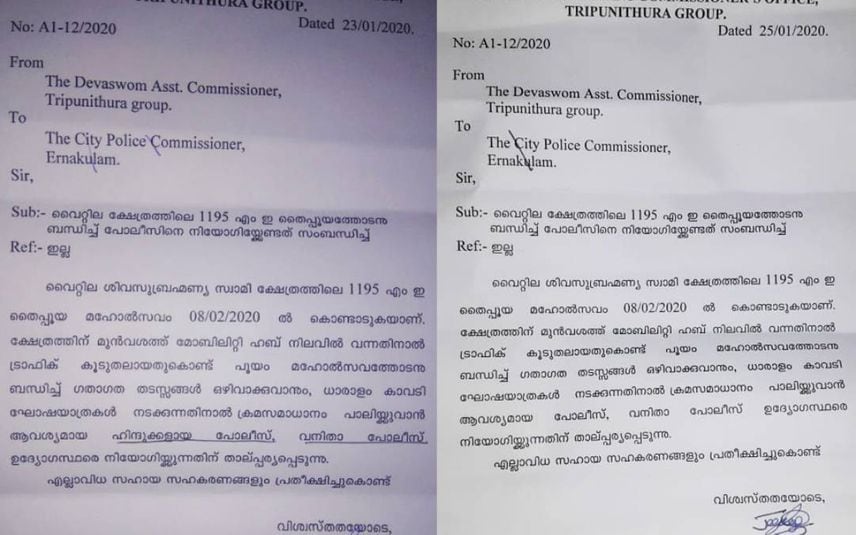 Kochi: The Cochin Devaswom Board (CDB) landed in trouble after it sought ‘Hindu’ police officers for duty during a temple festival here.

After the Police Association filed a complaint against the request, the Cochin Devaswom Board corrected the letter and sent a new one without mentioning religion.

The Cochin Devaswom Board had sent a letter to the Ernakulam city police commissioner on December 21 requesting to deploy ‘Hindu’ policemen and women to control the crowd and traffic besides maintaining law and order at the Sri Siva Subrahmanya Swayambhoo Temple in Vyttila for the Thaipooya Kavadi festival scheduled to be held on February 8.

On receiving the letter, the police association expressed dissent and filed a complaint with Devaswom Minister Kadakampally Surendran. The police association demanded that the force should not be divided based on religion and caste. They demanded to deploy police personnel at places of worship without religious discrimination.

The police association also filed a complaint with the city police commissioner.

When asked about the letter, the Thrippunithura assistant commissioner of Cochin Devaswom Board explained that it was the ‘usual style’ in which they used to send such requests.

However, as the letter created a controversy, the Cochin Devaswom Board withdrew the letter and sent a new one to the city police commissioner without mentioning the religion.

Insult to foreigner at Kovalam: Departmental inquiry against three cops including SI

Thiruvananthapuram: The Kerala government here on Monday announced that they have stopped publishing the daily COVID case officially. The health department ..

Kochi/Thiruvananthapuram: A day after senior Congress leader K V Thomas alleged that he participated in the CPI(M) 23rd party congress due to threats from ..

Kochi: As the assembly by-election in Ernakulam’ s Thrikkakara constituency is in the limelight, discussions have started to select the candidates. Amid ..

Kochi: Actress Kavya Madhavan will not appear before the probe team for interrogation related to the actress attack case on Monday. In a letter to the ..

Kochi: The interrogation of actress Kavya Madhavan in relation to the actress assault case has been postponed to Wednesday. A notice had been sent to summon ..

Thiruvananthapuram: Reeling under financial crisis, the much-awaited long-distance service of the state transport, KSRTC-Swift, will start service on Monday ..