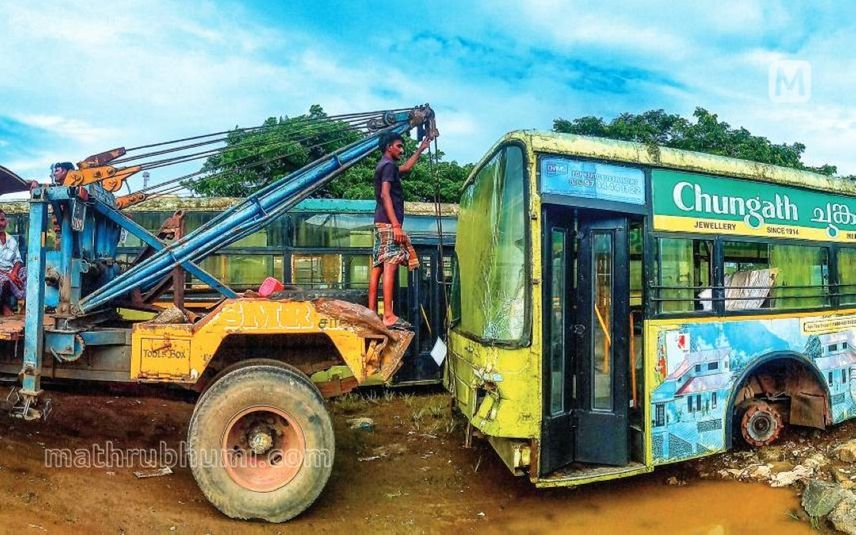 KURTC bus being removed from the yard | Photo: Mathrubhumi

Kochi: The JNNURM (Jawaharlal Nehru National Urban Renewal Mission) AC low-floor buses of Kerala Urban Road Transport Corporation (KURTC) that were sold as scrap were moved from the depot here. The workers of the dealer from Tamil Nadu who bought the buses arrived at yard near the Ernakulam bus stand and moved four buses using cranes and shifted them to Salem on Friday night.

Few of the buses had no front tyres and the tyres in the back were trapped in the mud. There are nine buses left to be moved to Salem. These buses came to the stand from various depots.

KSRTC considers buses that have been used for 9 to 16 years as scrap. There are 920 buses that are in an unusable state at present. Out of this, 681 buses are normal buses and 230 are JNNURM buses.

The High Court had recently criticised the KSRTC action to sell the unserviceable buses for scrap value without selling them off at the right time. The division bench comprising Justice Devan Ramachandran and Justice Sofy Thomas had pointed out that that is how things are being done in the case of private buses.

Though the transition to the KSRTC Cluster system is rapidly progressing, the distribution of salaries has not yet been completed. Employees, including mechanics and additional administrative officers, have not received salaries even after months.