Congress poll: Second-tier leaders of Kerala back Tharoor while top brass remains vary of him 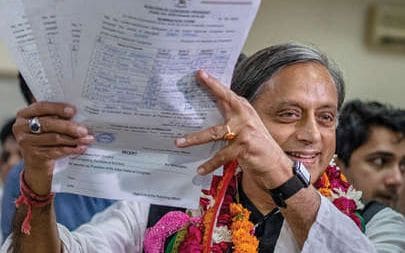 Thiruvananthapuram: Though the top brass of Congress in Kerala is not keen on the candidature of Shashi Tharoor for the Congress president post, the second-tier leadership is seen extending support to him.
It includes Kozhikode MP MK Raghavan, former MLA KS Sabarinathan, and seven other leaders from Kozhikode who signed his nomination papers.

Thiruvananthapuram MP Shashi Tharoor filed six sets of nominations for the poll on Friday. He had reportedly collected seven sets of papers.
Since the announcement of the poll, most of the leaders in Kerala camp were seen extending their blanket support to high command. Veterans like Kodikunnil Suresh and K Muraleedharan through their statements made it clear that they are not endorsing Tharoor.

The Nehru-Gandhi family, meanwhile, maintains that they are not supporting any candidate in particular. However, sources claimed that the family is implicitly backing Mallikarjun Kharge, who announced candidature on the last day of nomination. Interestingly, senior leader from Kerala, AK Antony, has backed Mallikarjun Kharge by signing on his nomination paper. Kharge managed to file eight sets of papers despite being a late entrant. He even gained support from the reformist G23 leaders. The G23, which Tharoor is also part of, has asked the Kerala leader to withdraw from the race.

On the other hand, Tharoor seems to be confident about his candidature and has hinted at a reformist agenda. He had earlier said that he did not enter the fray for the G23.