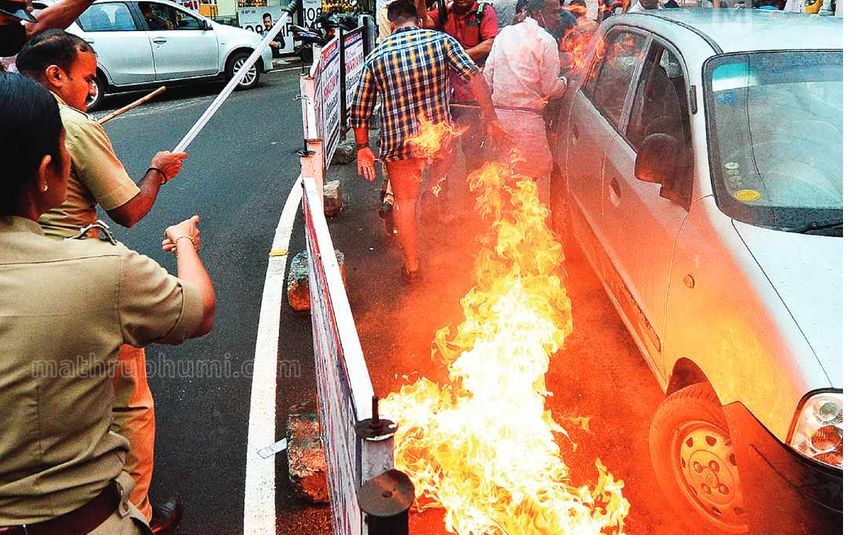 From the visuals of the protest

Palakkad: A protest by Congress activists of burning the effigy of Prime Minister Narendra Modi went awry with three protesters suffering minor injuries. Though a major tragedy was averted, a few activist including Palakkad municipality councillor, DCC president A Thankappan sustained minor burn injuries when the dhotis caught fire. Congress workers were protesting against the detention of Rahul Gandhi in Delhi.

The dhoti of PS Vipin, councillor of Vithuni (ward number: 40) and the district secretary of Youth Congress in Palakkad, caught fire. The protesters, who marched from the DCC office, halted in Sulthanpettai and raised slogans sitting on the road. Soon police rushed to Sulthanpettai and attempted to arrest the protesters and remove them from the road. This urged the Congress activists to burn Modi’s effigy in haste.

When fire spread to the dhotis of some protesters, everyone except Vipin ran quickly leaving the dhotis. But Vipin sustained minor burns on the back of his legs as he removed it a little late. He was immediately taken to the district hospital in a police vehicle. DCC president Thankappan was injured on his toe.

MV Govindan slams Fr D'Cruz over his remark against minister, says he upholds ...