The Kerala government has the same stance as that of Prime Minister who wants to sell the country to corporates, she added. 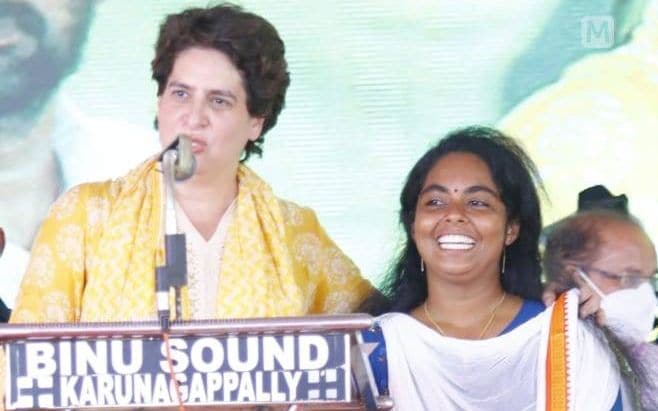 Karunagappalli: Congress leader Priyanka Gandhi on Tuesday arrived in Kerala to add vigour to the UDF election campaign. Addressing a public meeting here, she said that the people of Kerala are the real gold as far as Congress is concerned. She alleged that Chief Minister Pinarayi Vijayan has his eyes on foreign gold.

The Kerala government has the same stance as that of Prime Minister who wants to sell the country to corporates, she added.

More than 50 percent of the Congress candidates are youngsters. All eyes are on the verdict in literate Kerala. The election manifesto of the UDF was prepared evaluating the wishes and hopes of the public, she added.

“Congress realises that the real gold in Kerala is the people. But Kerala CM has eyes on foreign gold. CM and the government is more interested in selling off deep sea and resources,” Priyanka said.

There are three political options in Kerala. One is CPM’s violence and corrupt politics while the second is Modi’s politics rooted in communalism. But the third choice is of Congress’ that has clear-cut vision for the future. LDF had made many promises while coming to power. But they have unleashed murderous politics, she added.

Thavanoor: It is wedding bells for Niranjana, the daughter of former Speaker of Kerala Legislative Assembly P Sreeramakrishnan and his wife Divya. But ..

Thiruvananthapuram: A huge number of women candidates with a higher level of educational qualification will be inducted into Kerala Police on Sunday.Among ..