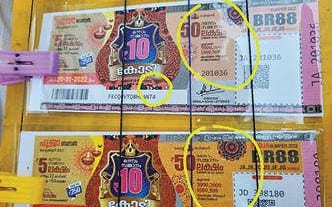 The tickets with different colours and flower patterns

Alappuzha: The sales of Pooja Bumper lottery tickets in Alappuzha district are hit over concerns of fake copies.

Kerala State Lotteries Department maintained that it has not received any complaints over the matter but printing in some tickets looks different. However, the department clarified that printing issues can be a reason for the concerns.

Some tickets are red while others are pink. The pattern of flower in some tickets do not look alike.

The tickets, suspected to be fake copies, are more seen with small retailers. Due to fear they are not selling tickets with printing issues.

Earlier, fake copies of different lottery tickets were reported from various parts of the state. A detailed examination will be required to find whether fake copies are in circulation.

Meanwhile, Kerala Lottery Agents and Sellers Association urged the government to print all lottery tickets with safety features used in the printing of Onam Bumper tickets.