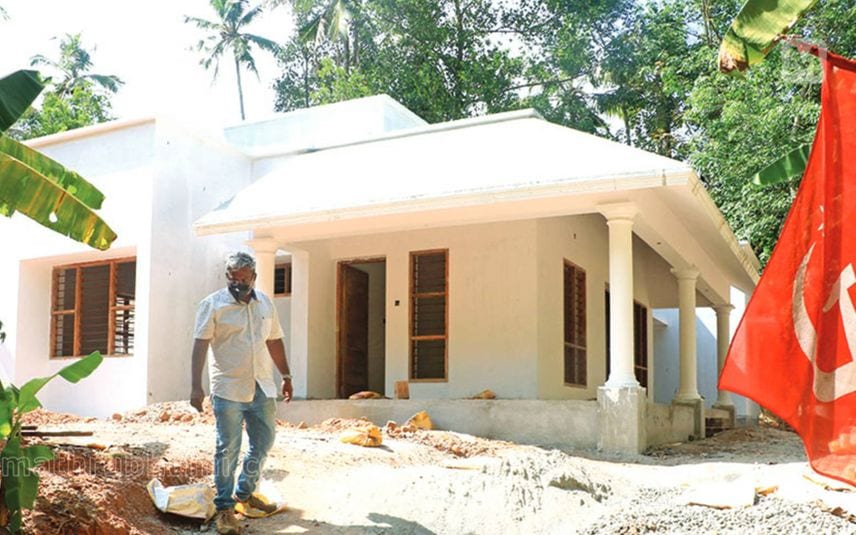 PK Gurudasan in front of his newly built house

Thiruvananthapuram: For the past six decades PK Gurudasan was agile in Kerala politics as a CPM activist, MLA and minister. But amid his active political career, he could not earn enough to build a house of his own. However, his beloved comrades came together to realise a house for Gurudasan near Nagaroor and the construction works have reached the final stage.

Gurudasan had been the CPM district secretary of Kollam for 25 years, MLA for 10 years and Minister for Labour and Excise for 5 years in the ministry of VS Achuthanathan.

He resided at a rented house near the Kollam district committee office for a long period. Later he shifted to other houses in Mundakkal and Polayathode. He was always keen to fill all these houses with his book collections.

Marriages of his elder daughters Seema and Divya were held while living in rented houses. His youngest daughter Roopa got married when the family was living at the minister’s residence in Kowdiar. Gurudasan and his wife Lilly are now residing at the party flat near AKG centre. Following the CPM state conference, they have to leave the flat as Gurudasan will step down from his official charges soon. This had urged the Kollam district leadership to present a home for Gurudasan.

Minister KN Balagopal, Kollam district secretary Sudevan and former secretary Rajagopal took the initiative for constructing a house for Gurudasan. The fund had been raised solely from the co-activists of Gurudasan and no money was collected from the public. The house with 1700 square feet has been built on 10 cents of land on his wife Lilly’s ancestral property. Gurudasan and his family will move to the new house by the end of March.