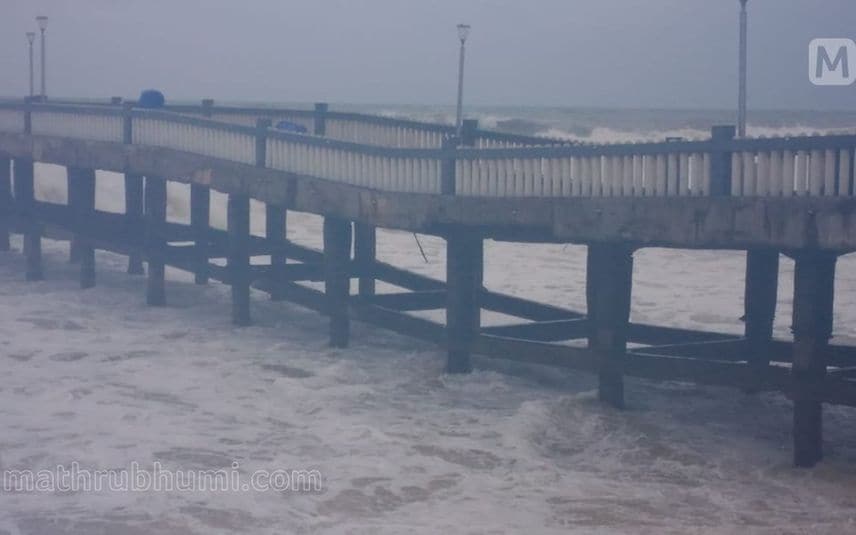 Thiruvananthapuram: The after effects of the deep depression formed over Lakshadweep in the Arabian Sea that intensified into a cyclonic storm (Tauktae) over the archipelago and adjoining southeast east central Arabian Sea moving northwards during the past six hours, has caused huge damage to the coastal areas in Kerala.

Even though the depression is approximately around 290 km away from Kannur, on account of the heavy rains across the state, and with the sea turning rough, the state government has been forced to open numerous camps across the state to move people to safety.

According to the India Meteorological Department Tauktae is very likely to intensify further into a severe cyclonic storm during the next 24 hours and expected to move north-north-westwards and reach near the Gujarat coast by May 18 morning.

Kerala Chief Minister Pinarayi Vijayan has informed the preparedness of the state in facing any calamity arising out of the cyclonic storm.

"Even though, Kerala is not in the predicted path of the cyclone, heavy rains, strong winds and strong sea gusts are expected in the State till May 16. We should exercise utmost caution in districts and adjoining districts where the Meteorological Department has issued a Red and Orange Alert," said Vijayan and appealed to all to cooperate with the authorities and move out to camps whenever told.

Even though so far there has been no casualties reported, the rain and the rough sea has caused innumerable hardships to the people, who are already battling the Covid pandemic.

The worst affected on account of the rough sea include the coastal hamlets in the state capital, parts of Kollam, Alappuzha, Ernakulam, Thrissur, Malappuram, Kozhikode, Kannur and Kasargode.

Starting Friday night, huge number of trees were uprooted and power supply disrupted for long hours on account of the high speed winds and heavy rain. In many places the supply was restored on Saturday, while in few places it's yet to be restored.

With the state under a total lockdown from May 8, the only saving grace was the police did not have much work to man people on the roads.