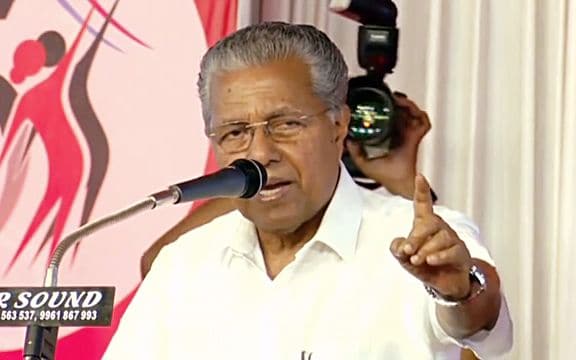 Thiruvananthapuram: Chief minister Pinarayi Vijayan on Thursday stated that the Kerala government will move ahead with the construction of Vizhinjam International Seaport. He added that the Government would not cede to the protestors' demand for halting port construction.

Speaking at an event here, CM said that the protest in Vizhinjam is not against the LDF government but against the people of the state as it hampers the state's progress.

"Where is this leading? What emotion are you trying to evoke? You launched a massive attack on the police station, leaving cops injured. What was the provocation?" Pinarayi asked while mentioning the recent attack on Vizhinjam police station.

"All political parties and organisations condemned the attack at the meeting held at the Collectorate. The Samara Samithi (protest committee) admitted there was an attack."

Pinarayi Vijayan said that the state government would not back down from the project over provocations from protesters. What happened to the National Highway widening, GAIL pipeline and Edamon-Kochi power highway will happen to Vizhinjam Port. There will be no compromise on the project, he added.

He also slammed Father Theodacious D’Cruz for his “terrorist” remark against minister V Abdurahiman. Father D’Cruz on Wednesday said that there was a “terrorist” in the minister’s name. He was reacting to the comment of the minister that the protesters were “traitors” as they were blocking the development of the state.

“There always have been some forces against the development of the state. They are now all working together. They are trying to destroy the tranquility of the state. It cannot be allowed no matter what form it takes," Pinarayi said.

The Vizhinjam protest was intensified a few months ago under the leadership of the Latin Archdiocese of Trivandrum. Protestors attacked the Vizhinjam police station on Sunday (November 27) demanding the release of the arrestees in cases related to the violence on Saturday (November 26).

The protesters are demanding proper rehabilitation and a study of the impact of the project. Though the government has agreed to most of the demands, it refused to stop the project till the completion of the study. Government argues that 80 per cent of the work has been completed and there is no way that such a huge project of the magnitude of Rs 7500-crore can be stalled at this stage.