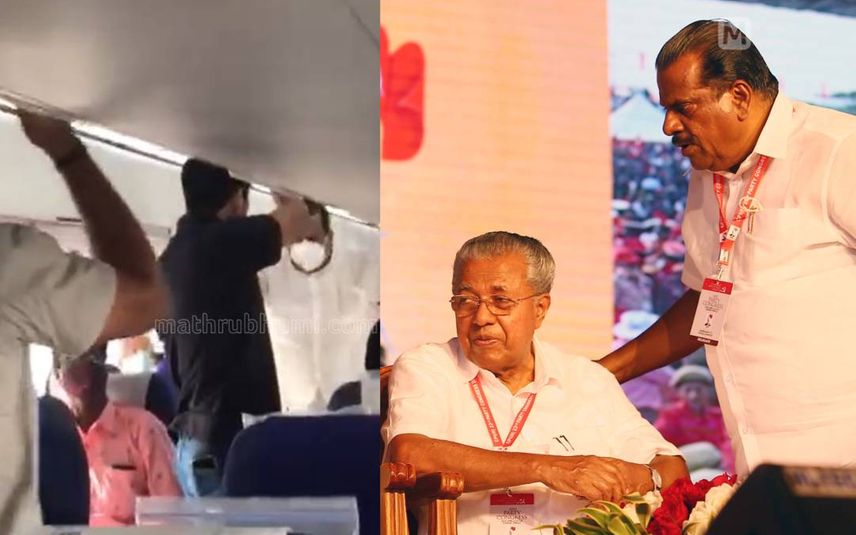 Thiruvananthapuram: CPM has condemned the Youth Congress protest against Chief Minister Pinarayi Vijayan inside the aircraft in which he travelled from Kannur to Thiruvananthapuram on Monday. LDF convenor E P Jayarajan termed the protest as a "terror activity".

Jayarajan, who allegedly pushed aside the two protestors according to the Congress, equated what happened in the aircraft with the activities of terror groups.

He alleged that Congress has fallen to the extent where it was "adopting methods of terror groups" and claimed that it was an attack on the Chief Minister.

The LDF convener, speaking to reporters after the incident, said that everyone was criticising the security arrangements of the Chief Minister when the Congress was allegedly walking around with "such terrorists".

He added that if he didn’t intervene, the protestors might have attacked the CM.

He further said it was unfortunate that a Chief Minister of a State cannot travel in peace on board an aircraft and such a situation has arisen allegedly because of the Congress.

Jayarajan, on the other hand, claimed that the duo, who were sitting in the front of the plane, were drunk, could not talk properly and were walking towards the Chief Minister after the plane landed and everyone was getting ready to deboard.

He said the public, including those supporting the Congress and UDF, should condemn and oppose such actions which could lead to anarchy in the State and disrupt the peace here.

He told reporters that further action has to be taken against the two protestors by the airline or DGCA irrespective of whether any complaint is made by the Left front.

Youth Congress State vice-president and former MLA K S Sabarinathan released a three-second video on social media in which the two workers of the organisation were seen raising slogans against the Chief Minister seeking his resignation and a man who accompanied Vijayan then forcefully pushed them aside.

In the video, as the duo fell, they could be heard asking whether people do not have the right to protest.

Meanwhile, an officer of Valiyathura police station said no steps have been taken against the duo till now as they were awaiting a report from the airline regarding the incident.

Presently, the duo are reportedly in the custody of the airport security.

The protestors, posing as passengers, reportedly boarded the flight at Kannur airport.

Vijayan has been facing protests by the Congress and BJP workers since gold-smuggling case key accused Swapna Suresh made a claim that he and his family members had a role in some smuggling activities.