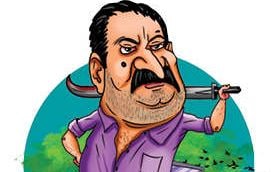 Kerala Police was criticised at the CPM Party Congress in the presence of the Chief Minister. Pinarayi, who arrived in the capital after the Party Congress, called a meeting of top police officials on the same day. During the meeting, the police explained that they failed to detain the goons as the District Collectors did not make a timely decision on the applications submitted by the police.

Following this, the District Collectors were directed to take a decision as soon as they receive an application on KAAPA. CM directed the Collectors and district police chiefs to take strict action in this regard.

Earlier this year, 557 people were added to the goonda list. The police have been directed to make files against them and keep them in observation under the KAPA Act. He also directed the collectors to take an immediate decision on 190 applications with them.