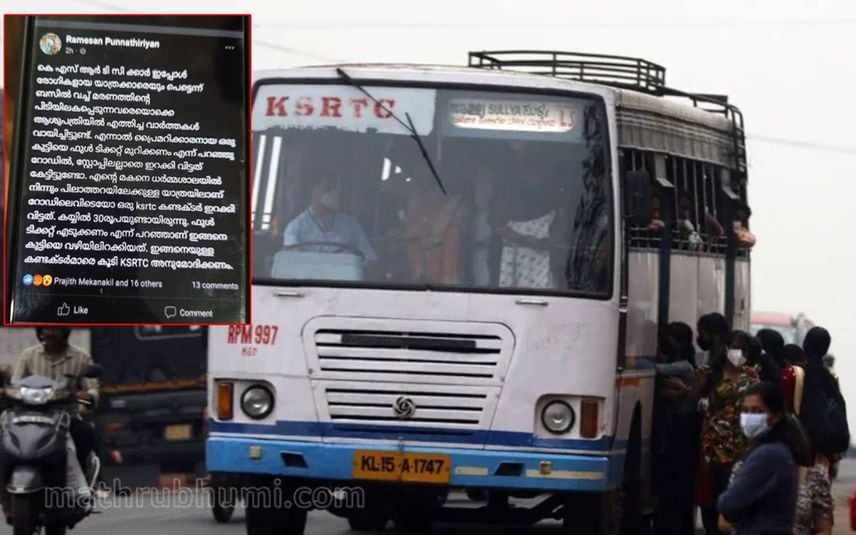 Kannur: Pilathara native P Rameshan filed a police complaint against KSRTC over the ordeal faced by his son during the journey in bus. Rameshan also took to social media and detailed about the experience his son M Niranjan faced.

According to the social media post, the incident happened on Friday. The boy boarded the KSRTC bus around 3:30 PM from Dharmasala to Pilathara. Usually he takes half ticket but the conductor asked him to take full ticket. The boy had only Rs 30 which was not enough to pay for the ticket.

The conductor asked the boy to alight from the bus if he cannot buy the ticket. He also told the boy that the bus does not stop at Pilathara. The boy was forced to leave the bus midway, his father’s social media post read.

The boy started to walk in the rain and reached a nearby bus stop. From there, he boarded a private bus to Taliparamba. When the conductor enquired about the pass, the boy started to cry and explained about his ordeal. The bus workers sent him in another bus to Pilathara.

Exasperated over the incident, the boy’s father said KSRTC conductor could have dropped the boy at a bus stop occupied by people or at Taliparamba stand.

Meanwhile, KSRTC said they were not aware of the issue. However, they informed that those above 11 years should take full ticket. They added that forcing a child alight from the bus midway was not right.