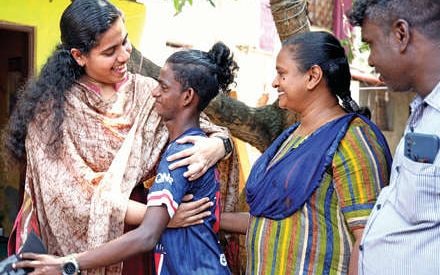 Arya Rajendran with Roshan and his family

Thiruvananthapuram: Mayor Arya Rajendran has handed over a new hearing aid to Class 11 boy Roshan of Rajaji Nagar who was in distress after losing his hearing aid.
The boy's plight made headlines after his mother took to her Facebook post seeking help to find the missing hearing aid.

Roshan is a student at Government School For the Deaf & Dumb in Jagathy. While returning from school he lost his bag which carried the specifically programmed hearing aid inside, which cost more than Rs 1 lakh.

He is not from a well-off family and buying a new hearing aid is a challenging task. Even the lost one was received as a part of the government’s assistance scheme. Similarly, the hearing difficulty toppled all his daily routine including sessions at school.

His mother took the matter to Facebook and the post was widely circulated. As the bag remains missing, the mayor who came to know about the boy’s plight through the media visited the boy. She assured the boy that the corporation will help him if the hearing aid is not found within a few days. On Sunday, the mayor surprised Roshan by gifting a new hearing aid to him.

The hearing aid was given with the help of KIMS hospital.