Chithra and her family have been living in a rented house for 14 years. 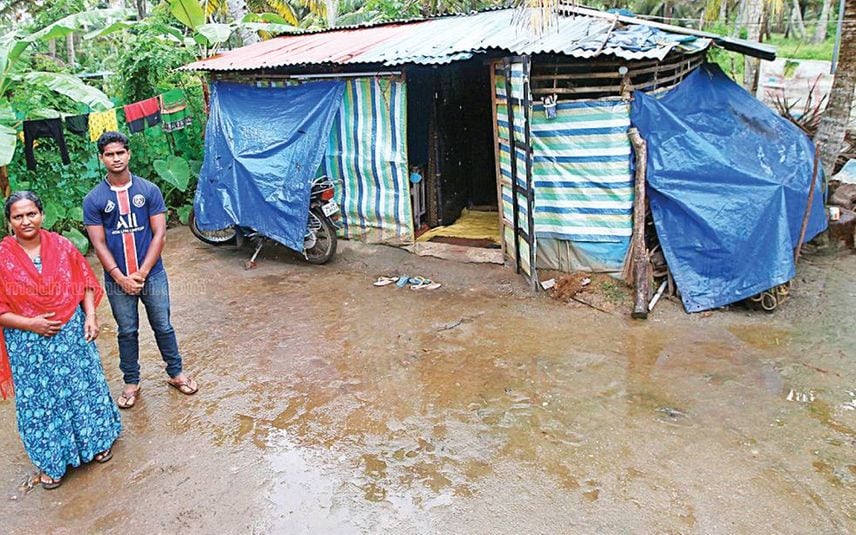 Chithra and her son near their plastic shed

This has been going on for almost a year. The construction materials that were brought to build a house are just lying around on the roadside. This caste-based discrimination is taking place in the very land of poet Kumaran Asan who wrote the revolutionary line ‘Maattuvin Chattangale...’

It was two years ago that the Haripad block bought five cents of land for Rs 3.70 lakhs and gave it to Chithra and her family. They have been living in a rented house for 14 years. Thrikkunnappuzha Panchayat granted Rs 4 lakhs for building a house by including them in Life Scheme. Rs 40,000 was also paid as the first instalment. The metals and cement blocks that were brought for construction were stopped by three of their neighbours and they also tormented the family with casteist slurs.

Although Chithra filed a complaint with the police stating that they were not being allowed to take things through the Panchayat road, she was not given protection. The vehicle drivers were threatened that their vehicles would be burned. With this, they dumped the load near the roadside and left.

Although the scheme executing officer and village extension officer T S Arunkumar filed a complaint with the police by stating all the evidence on March 16, no measures were taken following it. The neighbours had banned the bringing of gas cylinders to Chithra’s house through this road. They have not been able to build a toilet yet.

Chithra’s husband Dhanesh is bedridden due to paralysis. Their makeshift house gets flooded during the rains. They also fear that their neighbours will not allow even ambulances to pass if an emergency situation happens someday. Chithra has two children, a son who is a Plus One student and a daughter who is in 5th standard. Chithra is leading a menial life with the very small amount of money she makes from the spinning of coir.

Karthikappally Tehsildar B C Dileep Kumar said that he never realised that our society is in such a state. Everything is favourable to Chithra, even the court order. Their state is pathetic. They can carry things through the panchayat road without fear. The problem has been presented before the collector, he added.