“I have confidence now and I am grateful for the support that I’m receiving,” Chithra said with a beacon of hope in her eyes. 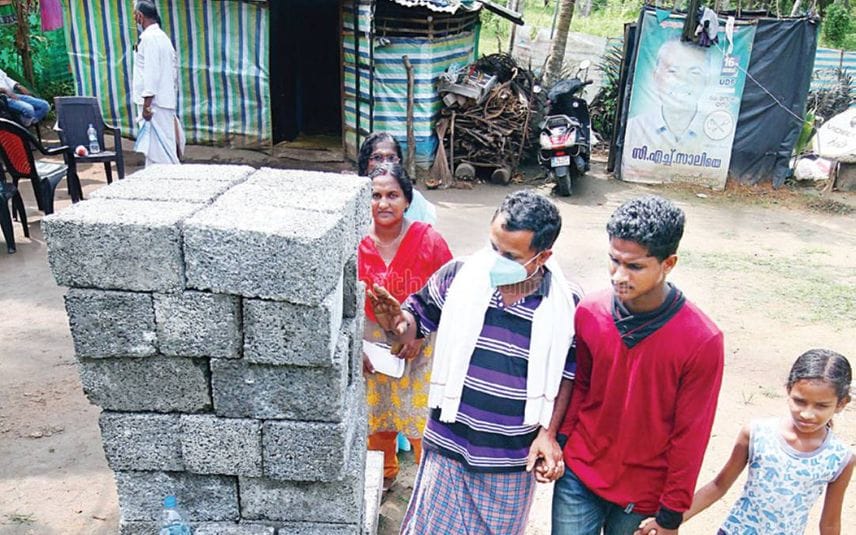 Chithra, husband Dhanesh, son Dhanoop, and daughter Neena next to the construction materials brought for building their new house

Alappuzha: Chithra who was going through ordeals one after another and was fighting a one-woman battle, has finally got support from the authorities. However, the hardships in life had made her so strong that she did not even shed a drop of tear on seeing the helping hands.

Chithra has to take care of her paralysed husband and manage her kids. She works menial jobs to make ends meet. But amidst all this, she was faced caste-based discrimination from the people in the neighbourhood. She found the courage to file a case over this in court with the help of Dalit Centre State Vice President Mohan C Aravunthara.

The WhatsApp group of her classmates in Plus Two in Purakkad SNMHSS collected a fund upon hearing about her husband’s state and gave it to her. She took a part out of it to construct the plastic shed in which they are now living.

When she got five cents of land for house construction, someone sent a complaint to the authorities stating that she did not belong to a scheduled caste. The scheduled caste vigilance department led an investigation and found that the complaint was fake.

The woman in the house near the starting point of the Panchayat road and two other neighbours stopped Chithra from bringing construction materials for building the house. These materials were bought using the monetary support from the Life Scheme. Nobody dared to question them when the neighbours said out loud that they won’t let their locality turn into a scheduled caste colony.

VEO Arunkumar, who is in charge of the scheduled caste funds, filed a complaint with the Thrikkunnapuzha inspector requesting help to carry the construction materials for building Chithra’s house. That did not change anything. The neighbours then filed a complaint stating that the area allotted for the government for Chitha's house contruction is wetland. The Tehsildar’s report was favourable to Chithra. The next complaint was that the report was procured by Chithra’s influence.

There was a favourable verdict in her complaint that she filed in Munsiff Court in Haripad over blocking of way. But she did not receive police protection. The next conclusion drawn by many was that the verdict was obtained by influencing the judge. Chithra was not allowed to bring rings for toilet construction. They were not even allowed to bring gas cylinders to their house.

Chithra said that she had no one for help during that time. Dalit Centre State Vice President Mohan C Aravunthara came with a helping hand after this. She submitted her complaint before the Chief Minister, Women’s Commission, Revenue Minister, Minister for Local Self Government, and Minister for Welfare of Scheduled Castes. “I have confidence now and I am grateful for the support that I’m receiving.”- She said with a beacon of hope in her eyes.