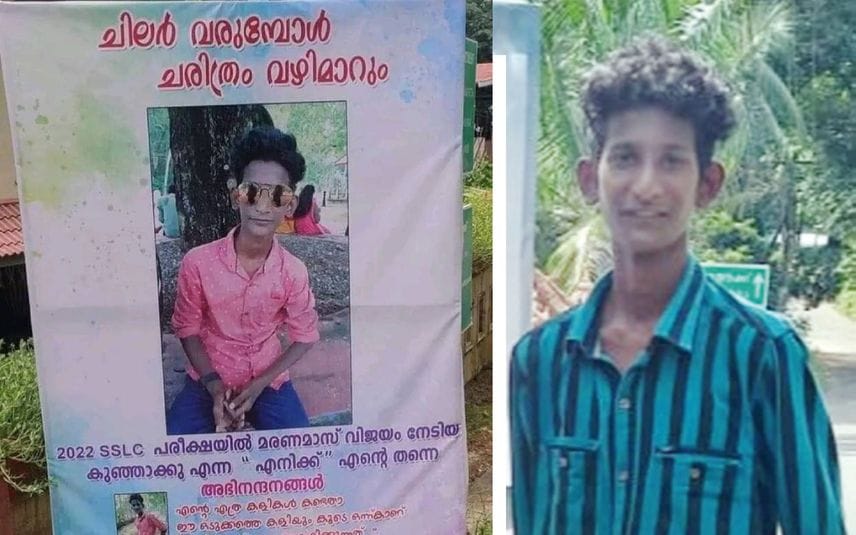 Kodumon: There is an interesting flex board installed near Kodumon-Angadical road. The flex has a photo and a very catchy caption that goes - ‘History makes way for some people’. Below the photo, it is written - My congratulations to Kunjakku aka ‘myself’ for acing the 2022 SSLC exams. The flex board is sure to spike the interests of those whose eyes stumble upon it. The photos of the board have also gone viral on social media.

Now, time for a little backstory. Kunjakku, aka Jishnu, son of Angadical native Omanakuttan and Deepa is the one who installed the flex to celebrate his success in SSLC exam. Why did Jishnu install a flex for himself? There is a bit of story there as well.

Jishnu and his sister Vishnupriya passed the exam after going through a lot of hardship. It has only been a week since they got an electricity connection at their house. All these days they used to study under the dim light of kerosene lamp. Both their parents are daily wage workers. Jishnu’s family consists of his twin sister, parents, elder brother Vishnu, paternal grandmother and uncle who has been bedridden for the past 30 years. Both twins were staying at their mother’s house in Pathanapuram as the atmosphere at their own house was not suitable for studies. Jishnu was a student at CMHS Kurumbakkara.

Both of them travelled 14 km on bus to reach school while studying in class 10. Jishnu said that his friends and family mocked him saying he would never pass the exams. He said that their words hurt him deeply and that is why he decided to install the flex board.

Jishnu said that installing the flex board was part of his sweet revenge. He had only very little money on his hands, so he sought the help of the Navajyothi Sports and Arts committee and installed the flex with their help.

Jishnu and his sister are preparing to start Plus One classes soon.