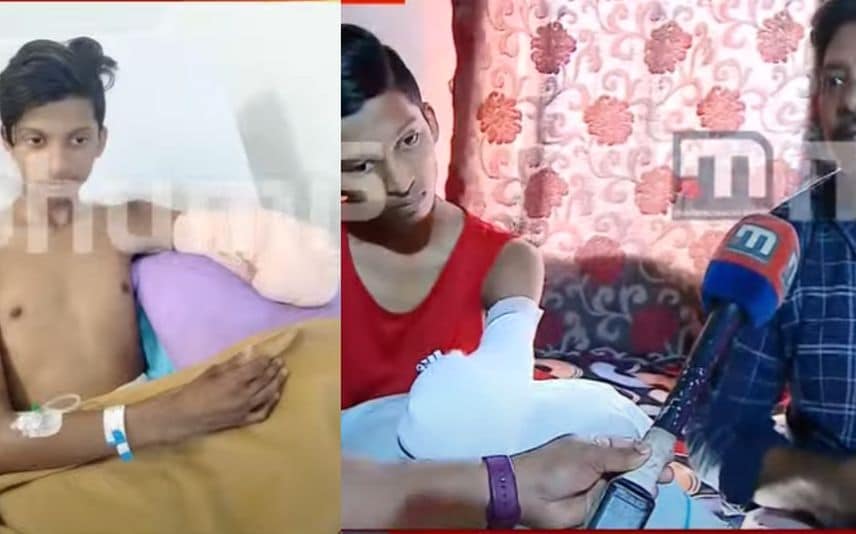 Kannur: A 17-year-old boy’s left arm has been amputated due to negligence on the part of doctors of General Hospital in Thalassery. Chettam Kunnu native Sultan Bin Siddique’s left hand was amputated below the elbow. A complaint has been lodged against Dr Binu Mon.

The boy fell and injured his left arm while playing football on October 30. As there were no facilities for x-ray in the General Hospital in Thalassery, Sultan’s father took him to the Cooperative hospital. Two bones of his left arm were found broken in the x-ray taken from there. The doctors of Thalassery General Hospital informed the family to conduct a surgery on November 3.

Though Sultan suffered severe pain on his arm, the doctor refused to treat him, alleges Sultan’s family. They demanded immediate medical care when a blue colour was noticed on the affected arm. An emergency surgery was conducted on only one bone. Sultan’s father alleged that the wound was kept open without proper dressing or stitching after the surgery.

The authorities had informed the family that the surgery on both bones cannot be carried out at the same time. Hence, the family accused the hospital authorities of delaying surgery for 13 days and conducting an incomplete surgery. If the doctor had referred Sultan to any other hospital on time, his arm would have been saved, said Sultan’s father.

Dr Binu Mon did not heed to their requests even after visiting him frequently. It was only after several days that he referred Sultan to Govt Medical College, citing lack of facilities for plastic surgery. The doctors at Medical College informed that four surgeries have to be conducted and the hand will have to be amputated if these surgeries failed. The doctors recommended amputation to prevent spread of infection to other organs. Later, Sultan was taken to a private hospital in Kozhikode and another hospital in Coimbatore. When the doctors in these hospitals also suggested amputation, they returned to Kannur and conducted the surgery at a private hospital in Kannur.

Sultan and his parents, who do not have a house of their own, are currently residing in a relative’s house.