The party will also publish books about women who went missing since their love marriages. 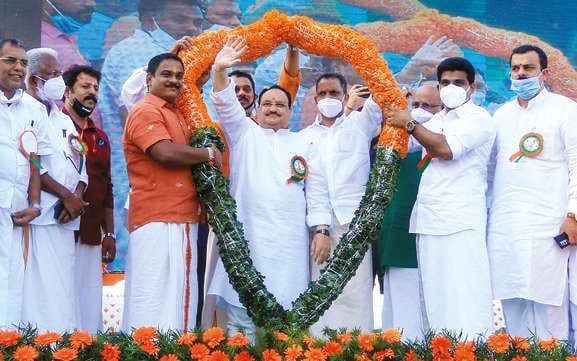 Thrissur: BJP has entered the election track with the arrival of party National President, JP Nadda. The party evaluated that the convention of District Presidents and the in-charges of 140 constituencies has created excitement among the cadre. This is the first time that such a convention was held with the presence of the party National President ahead of an Assembly election.

This is JP Nadda’s first visit to Kerala after being elevated as party National President. Nadda told the party leaders that they can win the election in Kerala if they stand together. He instructed the cadre to take the campaign to each and every household in the state.

Nadda also met with the leaders of Sangh Parivar organisations. It is reported that the leaders informed the BJP chief that they should also approve of the candidate list.

Meanwhile, BJP has initiated ‘Love Jihad’ campaign in the state to target Christian votes. Different events are organised under the leadership of minority affairs with the theme 'Hearts should not be pawned’. This is the first time that BJP has launched a public campaign in this regard.

BJP believes that campaign will be beneficial to them especially after Syro-Malabar Church Synod himself has taken an open stand against ‘Love Jihad’. The campaign will be launched by using the missing case of Jesna. Public events will be organised in all the districts in this regard.

The party will also publish books about women who went missing since their love marriages.

Jesna’s father had written to the Prime Minister demanding that the truth should be brought out. BJP is trying to bring central government intervention on the issue.

Minority Morcha State President, Jiji Joseph stated that Kerala has a lot of victims of ‘Love Jihad’. Even the police are afraid to admit this. The awareness campaign will be organised to protect the youth from becoming victims of this, he added.