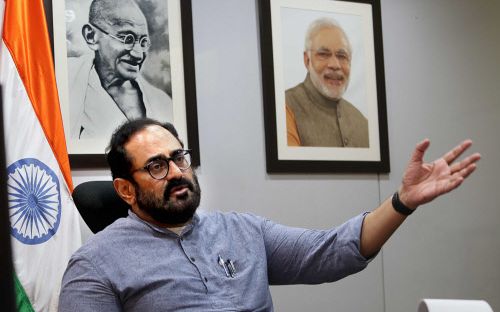 Rajeev Chandrasekhar. Minister of State for Electronics and Information Technology.

New Delhi: The BJP on Friday accused "Left-minded" political leaders in Kerala and those associated with the state government of "insulting country's heroes" like Chief of Defence Staff Gen Bipin Rawat, who died in a chopper crash last week along with his wife and 12 other defence personnel.

"Left-minded political operatives in Kerala have denigrated the deaths of Late Gen. Bipin Rawat, his wife and 12 other bravehearts in the tragic helicopter accident earlier this month," Union Minister Rajeev Chandrasekhar said at a press conference here.

"This is absolutely objectionable and disgusting that a political party in power in a state has insulted our bravehearts," he said.

Another BJP leader and Union Minister V Muraleedharan alleged that Rawat and other military personnel who died in the crash were being "denigrated" in Kerala with the "active connivance" of the Left government in the state.

BJP chief spokesperson Anil Baluni, who like Rawat hails from Uttarakhand, said it was painful to see people using unfortunate remarks to insult heroes like him.

This must be called out, he added.

Rawat and those who perished with him in the crash served the country with distinction, and there is no doubt in any Indian's mind about his distinguished services, Chandrasekhar said, referring to the outpouring of public emotions following the tragedy.

Some people were arrested in different states for posting messages on social media which were seen to be "insulting" to the country's top military officer or even celebrating his demise.

Muraleedharan noted that one of the officials who died in the crash belonged to Kerala.

Chandrasekhar said he himself is son of a military official, and added that he found it "objectionable, and disgusting" that a political party in power in Kerala will insult the tradition of service Rawat represented.

BJP spokesperson Rajyavardhan Rathore, a retired Army officer, alleged that some political parties have fallen so much in their lust for power that they are not sparing even the Army. PTI