Cracks on houses and grounds spark panic in Gudalur 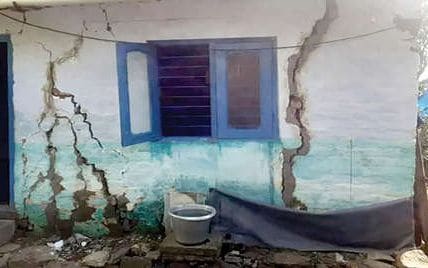 Cracks developed in a house in Gudalur

Gudalur: Dangerous cracks appeared on the walls of 20 houses in Gudalur where rain continues to lash for the past 15 days. Several instances of mudslides were also reported in Nadu Gudalur, where hundreds of people reside.

Lavatories, water tanks and compound walls have collapsed in many locations due to the visible cracks formed on the ground. Locals are scared to live inside houses. Experts visited and examined the houses in Mele Gudalur and Nadu Gudalur, where cracks appeared in the houses. After inspecting the filled lands of a private individual, the officials directed him to restore the levelled up canals here. The officials informed that a case will be registered against this person based on the charges of Environment Protection Act.

A disaster management team under the geological department is also continuing inspection in the region. On Tuesday, the officials had examined the cracks formed on Gudalur- Ooty national highway.