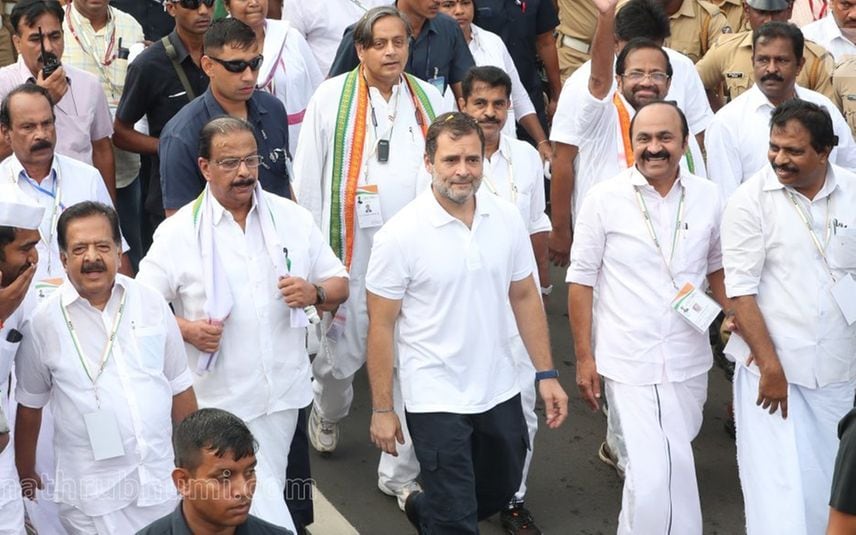 Thiruvananthapuram: Kerala respects everyone in the State and does not allow itself to be divided or hatred to spread here and therefore, the Bharat Jodo Yatra is an extension of these ideas, said Congress leader Rahul Gandhi on Sunday at the culmination of the fifth day of the yatra here.

Addressing thousands who had joined the yatra during the course of the day, Gandhi said, "Standing together, working together in harmony is natural and normal for the people of Kerala and you have shown this to the rest of the country."

He further said the reason the State has a good education system and the "most compassionate nurses" is because "Kerala respects everyone in Kerala".

"It does not allow itself to be divided nor does it allow hatred to spread in the State. So in a sense, Bharat Jodo Yatra is just an extension of the ideas that prevail in Kerala," he added.

He also said the message Congress was trying to spread through the yatra was "not a new message".

"It is quite an old message which is in the DNA of Kerala," Gandhi said and also thanked the people for showing up in such large numbers for supporting the yatra.

The first day of Congress' Bharat Jodo Yatra in Kerala, where the party has a significant cadre base and followers, saw a huge turnout which increased during the day as the journey progressed from Parassala to Nemom in the southernmost district of the State.

A large crowd of Congress members and workers as well as onlookers gathered at Parassala early in the morning, along with senior party leaders to welcome Wayanad MP Rahul Gandhi as he commenced the Kerala leg of the 3,570-km long yatra from Kanyakumari in Tamil Nadu to Jammu and Kashmir.

The first phase of the day's yatra ended after a three-hour long walk at Neyyattinkara and before the second phase resumed from 5 PM, Gandhi held interactions with students of GR Public School and also handloom workers of Balaramapuram here which is famous handloom garment manufacturing.

Gandhi listened to the weavers' concerns like poor pay, lack of benefits from the government and rising cost of raw materials, and said he sees them not just as handloom workers but as those who are protecting a historical and traditional industry, a release issued by Kerala Pradesh Congress Committee said.

While praising their work, he suggested that they come up with new designs and innovations and also offered all assistance, it said.

The workers also presented him a Congress symbol made by handloom.

Gandhi, during the break from the yatra, also paid tribute at the memorial of social reformer Ayyankali.

"During the afternoon break of the 4th day of #BharatJodoYatra @RahulGandhi visited one of the most revered Smarakams in India. Sree Ayyankali was one of the greatest social reformers of 20th century who empowered millions of deprived and discriminated, and remains iconic," AICC general secretary in-charge of Communications Jairam Ramesh tweeted.

In the coming days of the yatra, Gandhi would also be visiting the memorials of social reformers Chattampi Swamikal and Narayana Guru to pay tribute to them.

This was announced to reporters by senior Congress leaders when the yatra halted after the first leg of the day's journey, where they also launched the Malayalam theme song of the yatra.

They also termed as "beyond expectations" the huge turnout of people who came to see and join the yatra as thousands joined the march and even more thronged both sides of the road the 'yatris' were passing through.

"We never intended to mobilise a crowd for the morning leg of the yatra. It was only for the afternoon phase of the journey that the Congress workers were going to mobilise supporters to participate in the yatra.

"However, the response we got in the morning itself was beyond our expectations," the Congress leaders told the reporters.

In the aerial visuals shown on Twitter handles of Bharat Jodo Yatra and various Congress leaders, it was a serpentine procession which looked hundreds of metres long.

In the second leg of the day's journey, the turnout increased even further with the yatris shouting 'Bharat Jodo' and 'jodo jodo' slogans as they walked behind Gandhi.

Occasionally, children too joined the Wayanad MP for brief periods in the yatra.

Gandhi also took a short break for snacks at a roadside eatery in the morning which turned out as a pleasant surprise for the shopowner who was seen beaming in photographs and videos tweeted by Congress leaders and on the Bharat Jodo Yatra Twitter handle.

Speaking to the reportes after the yatra halted at Neyyattinkara, Ramesh announced the launch of the around three-minute long Bharat Jodo Yatra theme song in Malayalam.

Gandhi's sister Priyanka Gandhi Vadra, too, shared photographs of the yatra on her Facebook page and said that every section of society was excited about the Bharat Jodo Yatra which was evident from the participation and enthusiasm of farmers, labourers, youth, women, children and the elderly.

"The message of the people of the country is clear- inflation, unemployment, economic crisis and divisive politics should end," she said in her Facebook post.

After entering Kerala from Parassala close to the Tamil Nadu border, Gandhi would travel 450 km to Nilambur in Malappuram over a 19-day period.

The yatra would cover 12 States and two Union territories, and a distance of 3,570 km from Kanyakumari in Tamil Nadu to Jammu and Kashmir over a period of 150 days.

There would be mega rallies in 22 major cities.