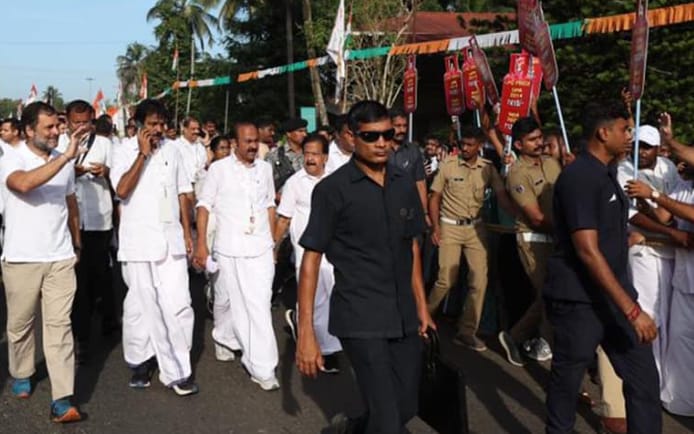 Thrissur: Congress leader Rahul Gandhi on Sunday resumed the Bharat Jodo Yatra from Thiroor in the district accompanied by hundreds of party workers holding banners and placards against the high cooking gas prices in the country.

The morning session of the 150-day-long yatra covered a distance of around 11 kilometres before concluding at Wadakkanchery.

Senior Congress leaders including, K Muraleedharan, K C Venugopal, Ramesh Chennithala, Leader of Opposition, V D Satheesan and MPs from the district among others joined Gandhi in his walk.

The Congress workers were carrying placards in the shape of LPG cylinders highlighting steep cooking gas prices in the country.

After concluding the morning session of the foot march at Wadakkanchery, Gandhi took a chopper to Nilambur and paid his respects at the residence of late Congress leader Aryadan Mohammed.

Senior Congress leader and former state minister Mohammed died at a private hospital in Kozhikode on Sunday. He was 87.

Gandhi said Mohammed was a pillar of the Congress and his demise was a great loss for the party.

"He was a pillar for the Congress, a grassroots party worker and an excellent politician and even a better human being. It's a huge loss for us and a tragedy for us. For me, he was a guide and an elder brother. It's a personal loss for us," Gandhi told the media.

On Saturday, Gandhi had launched a scathing attack on Prime Minister Narendra Modi over the rise in fuel and cooking gas prices in the country, and charged that the BJP and the RSS were spreading hate and violence to distract the people from such main issues.

"A gas cylinder used to cost Rs 400 when the UPA government was in power. The prime minister went on complaining about the Rs 400 for gas cylinders. But today he doesn't say a word about Rs 1,000 for gas cylinders," the Congress leader had said while addressing a massive crowd at Thrissur.

The Congress on Sunday asked the people to join it in its "historic movement as we march on to rebuild an India" that is strong, self-reliant, among the leaders of the world.

Women and children could be seen breaking the security cordon to meet Gandhi.

The Congress leader was seen talking to them, clicking pictures and waving at the people who were waiting for him on both sides of the road.

Gandhi is expected to meet people from all walks of life during the break at Wadakkanchery. The yatra will resume at 5 pm and conclude at Cheruthuruthy in the district.

The Congress' Bharat Jodo Yatra will cover 3,570 km in 150 days. It started from Kanyakumari in Tamil Nadu on September 7 and will conclude in Jammu and Kashmir.

The yatra, which entered Kerala on the evening of September 10, will go through the state covering 450 km, touching seven districts in 19 days before entering Karnataka on October 1.