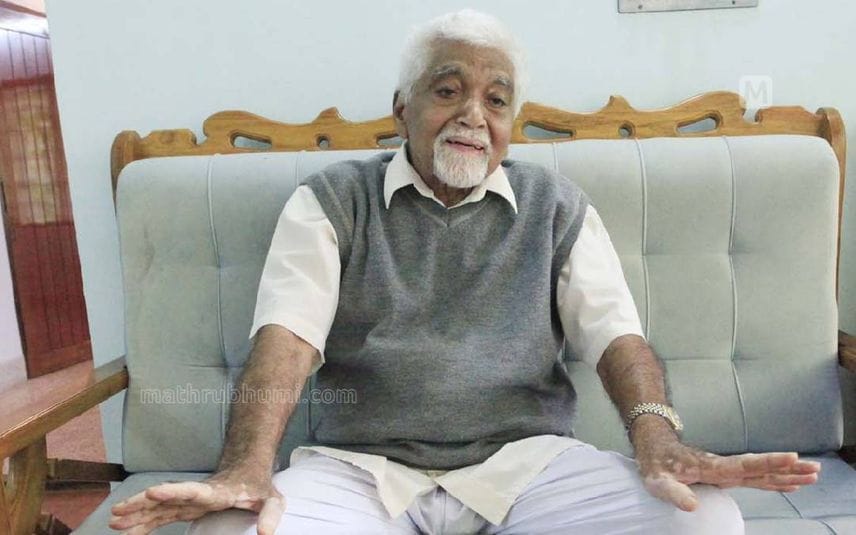 Kannur: Berlin Kunjananthan Nair (96), a communist party leader since the early days of its formation in the country, passed away at his home in Narath, Kannur at around 6 in the evening.

He was ailing from age-related issues for quite some time now.

Decision not to consider VS Achuthanandan ...

Nair was associated with CPM in Kerala during his prime days but later became a stringent critic of Pinarayi Vijayan in the peak period of the factional activities in the state. He firmly stood with former CM VS Achuthanandan, rival of Pinarayi, during that time. Nair was expelled from CPM in 2005.

However, in his last days, he showered praises on Pinarayi and expressed his wish to meet him after Nair's return to the party in 2015.

Nair also had said he wanted to go to the CPM Party Congress in Kannur in March 2022. He could not fulfill those wishes.

Nair was born to Ananthan Nair and Sreedevi on November 26, 1926. His political activities started during the school days itself. P Krishnapillai picked Kunjananthan to head the Baala Bharatha Sangham. He was the youngest delegate in the 1943 CPI Party Congress in Bombay (now Mumbai). He became the party card holder in 1942. He was jailed in connection with Morazha incident--a famous peasant movement that occurred in Morazha in Kannur during the independence struggle.

He worked underground in Bombay for the party during the 1945-46 period.

A former long-time journalist in Germany, Nair had worked as the private secretary to EMS Namboothiripad when the latter became the general secretary of the undivided Communist party in 1957. He had also worked closely with AK Gopalan. During his around three decade-long career as a journalist in East Germany, Nair was in touch with so many leaders of the erstwhile socialist block.

In 1958, he went to the Soviet Union and graduated from the Party School in Marxism-Leninism and Political Philosophy. Nair had attended the 21st Congress of the Communist Party of the Soviet Union that took place in Moscow in 1959.

CPM Kannur district secretary MV Jayarajan said he always stood for the communist party despite 'short-term' disputes. He added that Berlin has contributed hugely to the party education programmes while working closely with the state committee office in Thiruvananthapuram.