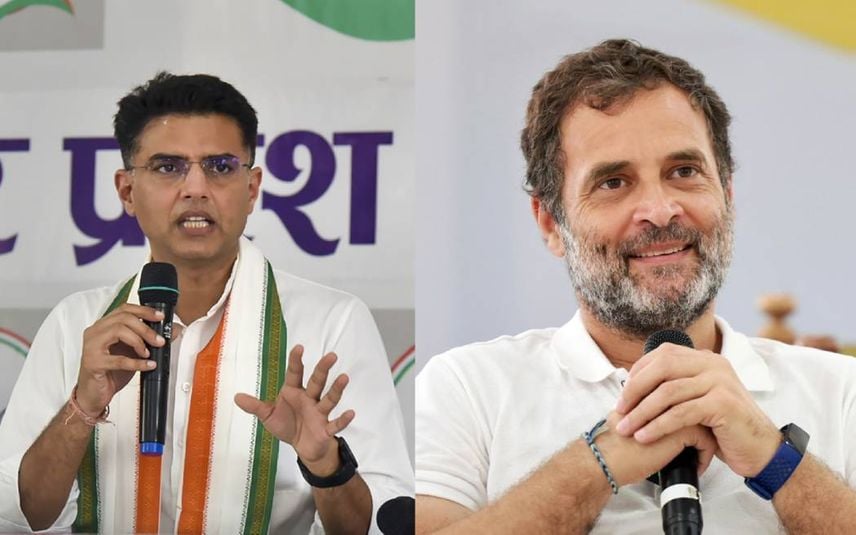 Kochi: Congress leader and former Rajasthan deputy chief minister Sachin Pilot on Wednesday said Rahul Gandhi was someone who did not run away from hard work or struggles and that is why the average party worker wants him to lead from the front.

Indicating his preference for party leader Gandhi to be the Congress president, Pilot, who is in Kerala and participated in the day's yatra as it moved through Kochi city, avoided questions by a TV channel as to whether he would support Rajasthan Chief Minister Ashok Gehlot if he were to contest in the party's presidential polls.

He also parried queries by the channel as to whether he would become the Chief Minister of Rajasthan if Gehlot, his arch-rival, was to become Congress president.

Instead, Pilot said, "It does not matter who contests in the polls. At the end of the elections, a stronger Congress would emerge. For that, we all need to work together. It is only by working together would we be able to oust the BJP from power."

He also said that presently he cannot speculate as to who all would contest and that would become clearer only by or after September 24.

Earlier in the day, AICC general secretary in-charge communications Jairam Ramesh, while speaking to the media, said no one requires the permission of its president Sonia Gandhi or its leader Rahul Gandhi to contest in its presidential polls.

Ramesh, at the same time, also said that he believes in selection of the party president based on consensus as per the Kamaraj model.

He invoked the "view" of legendary Congress leader K Kamaraj, which according to him, was "talk to everybody and find a suitable consensus choice" for leading the party.

"If consensus is not possible, then elections are desirable. We are not running away from holding elections," he said.

On who would be throwing their hats in the ring, Ramesh said he does not know who all will contest, but he certainly will not.

He also said that he does not know whether Gehlot will file his nomination and if he does, what will happen in that state.

"The Congress party has a system in place to deal with such situations," he added.

Amidst the ongoing speculation over who all would contest in the Congress' presidential polls, Gehlot -- one of the possible contenders for the post -- is expected to reach here in the evening to meet Rahul Gandhi.

According to Congress party sources, Gehlot is expected to arrive in Kerala on Thursday.

Gehlot is considered a frontrunner for the post as he is perceived to be having the backing and confidence of the present dispensation and is likely to be challenged by Shashi Tharoor, a member of the G-23 ginger group, who has expressed his desire to contest.

The Rajasthan Chief Minister, however, has so far denied that he is a candidate and said he will try to convince Gandhi to lead the party.

At the same time, he had also told Congress MLAs a day ago that they will be asked to come to New Delhi if he decides to file his nomination for the party president election.

The poll process for the Congress president's election will begin on September 22 with the issue of the notification, and the nomination filing will start from September 25 to 30. The election will be held on October 17 and the result will be out two days later.

Regarding the yatra, Pilot said that the BJP was rattled and worried by the traction on the ground that the party was getting and this was evident from the repeated attacks by the saffron party against the Congress and its foot march campaign.

"We must be doing something right if they are so worried," he added.

Pilot also said that the yatra was generating a huge response as people from all walks of life were either joining it or supporting it from outside.