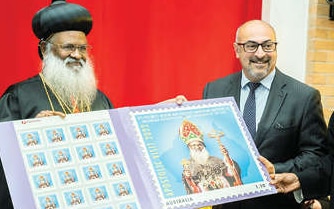 Australian parliament member Peter Khalil released the stamp at a Sunday ceremony held in Saint Mary’s Indian Orthodox Cathedral in Coburg. A portrait of Baselios Marthoma Mathews III in his official attire has been printed in the stamp worth 1.10 Australian dollars (Rs 58.84).

Baselios Marthoma Mathews has left for the US after visiting Australia.