According to the Project Officer of Integrated Tribal Development Project (ITDP) VK Suresh Kumar a sum of nearly Rs1.6 lakhs is spent every year for each tribal family through the 30 welfare schemes of the government for their welfare. 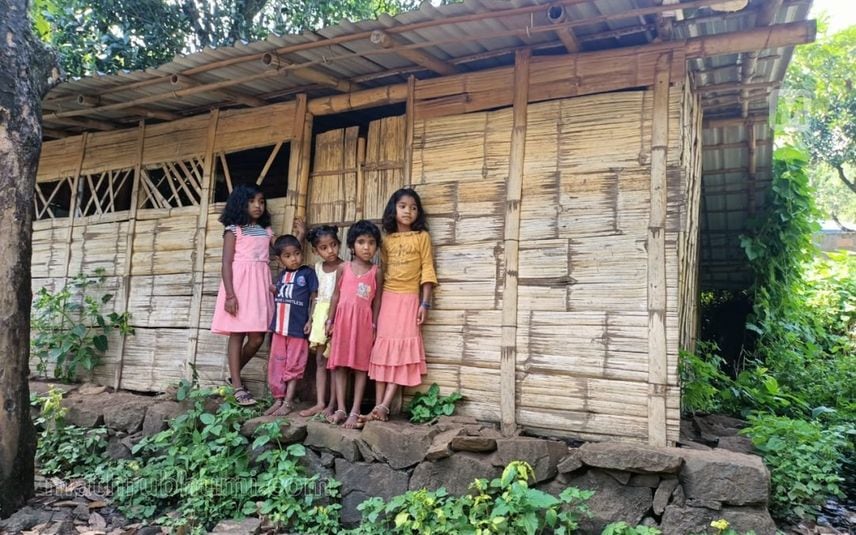 The children in Keezhethudukki in-front of the closed anganwadi.

Attappady: Lack of proper monitoring of the implementation of various welfare schemes of tribal population coupled with the lackadaisical attitude of the concerned officials in making the tribes aware of the reason behind infant deaths and their deteriorating health conditions are the major causes of infant deaths in Attappady, finds Mathrubhumi.com investigation.

Concerned officials have cited consanguineous marriages, usage of drug by tribal population and alienation of tribal lands are the major causes of various problems, including infant deaths, faced by them. Despite knowing this for years, the officials concerned have not moved any finger for addressing these issues.

Nearly 50% women in Attappady are underweight

According to a doctor at Kottathara Government Tribal Specialty Hospital, nearly 50 percent of the women in Attappady are underweight and weak so that they can not give birth to a healthy baby. Lack of nutrient-rich diet is pointed out as the key reason for ill-health among them.

The six-layer system formed to take care of the health of the tribal population has proven ineffective. Anganwadi teacher and helper, ASHA worker, tribal animator, tribal promoter and junior public health nurse are supposed to visit each tribal settlement twice a week to closely monitor their health conditions and to educate them. The people in the settlements said none of them visit their settlements.

Mathrubhumi.com during the visit to various settlements has found that anganwadis in many settlements remain non-functional for months and the community kitchen formed to feed them remain shut.

“Anganwadi teacher does not like to visit our settlement. However, she receives salary. It was through anganwadis, our kids got nutrient-rich food. With its closure, we provide rice and tomato curry only to them,” said Kali, grandmother of four-year-old kurumba.

The district collector and ITDP officer however claimed that all anganwadis and community kitchens are functional in all the settlements. A claim which was proven wrong during the visit of Mathrubhumi.com.

According to the Project Officer of Integrated Tribal Development Project (ITDP) VK Suresh Kumar a sum of nearly Rs1.6 lakhs is spent every year for each tribal family through the 30 welfare schemes of the government for their welfare.

“Apparently, the living standard or health condition of the tribes have not been improved and a detailed probe has to be held to find out where the money goes,” said Maruthi, President of Thaykulasangham.

There are many welfare schemes, including 'Janani Janma Raksha Scheme' and 'Janani Shishu Suraksha Karyakaram (JSSK), to to benefit pregnant tribal women for safe delivery.

The 20-year-old woman, Geetha from Veettiyoor tribal settlement, whose baby died three days after delivery on November 24 told Mathrubhumi.com that she has not received any of the benefits from the government during pregnancy. “I have applied through 'Janani Janma Raksha Scheme' for getting Rs 36,000. However, I have not received the money,” said Usha.

Mathrubhumi.com met Usha (25) from Keezhethodukki whose baby died soon after delivery on June 13 this year. The death of her baby was not included in the list of infant deaths in Attappady.

“I was pregnant for six months. There was no one to take care of me. I had to walk nine kilometres inside the forest to reach the road to visit the tribal hospital in Kottathara, which is around 30 kilometers from my house. On June 13, I visited the hospital and the doctor there asked me to undergo scanning. It was on the sixth-month of pregnancy I was scanned. After scanning the lady doctor there told me that my baby was safe and I returned home. At night, I got pain and I delivered baby abruptly. The baby died soon after delivery. No health worker visited me during pregnancy and I have not received any support from the government through any of the schemes,” said Usha.

This is not an isolated incident, there are hundreds of pregnant women in Attappady who have been neglected or uncared by the health workers.

As per the details provided by the district health department, 280 births per year have been taking place among tribals in Attappady every year. The infant mortality rate is recorded is 4.5 percent. However, many of the infant deaths go unnoticed in Attappady; like what had happened to Usha. None of the health workers knows Usha and the hospital has not even recorded the death of her baby.