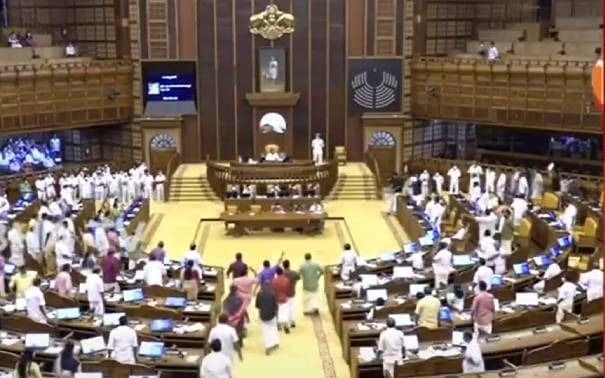 Thiruvananthapuram: The 5th session of the 15th Kerala Assembly was adjourned for the day following the Opposition ruckus. The House proceedings were suspended for the day by Speaker M B Rajesh after the Opposition plunged into the well of the House shouting slogans. The opposition members started shouting slogans in connection with recent political developments in the state, including the vandalism of Rahul Gandhi's Wayanad office allegedly by SFI activists.

Subsequently, the Speaker, amidst the continuing protests, allowed the tabling of the reports of the various assembly committees by the ministers heading the same and thereafter, adjourned the House for the day at 10.24 AM.

Meanwhile, strict regulations have been imposed for mediapersons. It was the media which first reported the presence of Anitha Pullayil on the premises of the Loka Kerala Sabha. She had entered the complex without a pass. The Speaker’s office informed that security must be tightened on the premises and hence security has been tightened in all places except the media room.

Entry to the Assembly complex is only with valid pass. Media persons have been directed to report the happenings only from the media room. The media has been barred from venturing into the office of the opposition leader or of other ministers or even to the canteen. The Watch and Ward staff has been asked to keep a tight vigil.

Generally, if the House proceedings are temporarily stayed, then consensus meeting takes place at the Speaker’s chamber. The ruling and opposition leaders reach this place for discussions. Mediapersons too can visit the place. But with the new regulations, mediamen have been prevented from leaving the media room.