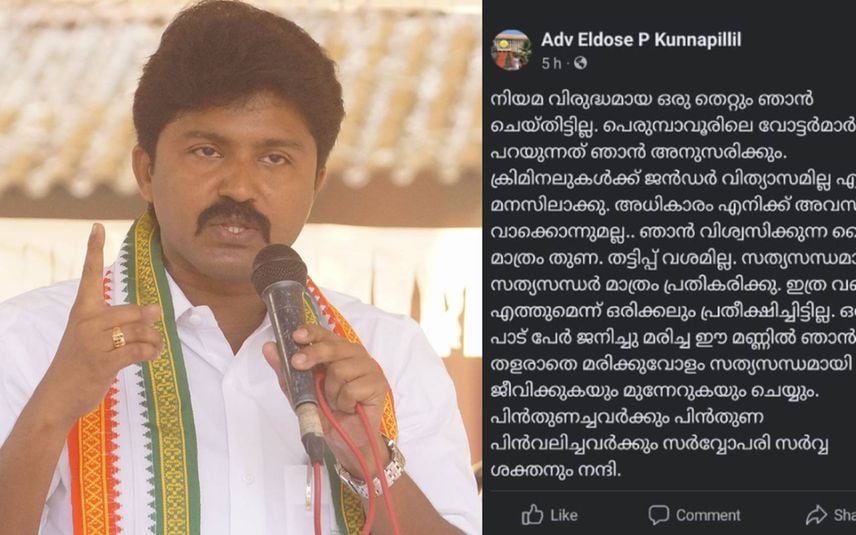 Kochi: Congress leader and MLA Eldhose Kunnapillil, who is facing assault charges, claimed that he has done "nothing illegal." In a Facebook post, the Perumbavoor MLA claimed his innocence and added that he is ready to obey the decision of his voters.

"I haven't done anything wrong. I will obey the decision of the Perumbavoor voters. I thank those who believed me and the almighty god," he wrote.

His remark came hours after the Congress MLA moved an anticipatory bail plea in the Thiruvananthapuram sessions court. Earlier, police registered a case under non-bailable charges based on a complaint lodged by a woman accusing Eldhose of assaulting her multiple times. She claimed the MLA promised to pay her Rs 30 lakh if she withdraws the complaint.

Following the allegations, senior Congress leaders in the state distanced themself from Eldhose. Further, KPCC President K Sudhakaran and Opposition leader VD Satheesan stated that strict action would follow if he is found guilty in police probe. Congress leaders also refused to meet him in person.

Meanwhile, his phones are switched off and his whereabouts are unknown to the police.