Usually, passengers are transported to nearby government hospitals or quarantine centers once they test positive. However, he was allowed to go freely out of the airport as he showed all the negative test results taken hours ago. Contrary to this, the officials of the airport told Mathrubhumi.com that he was taken in an ambulance (108) to the general hospital soon after tested positive. 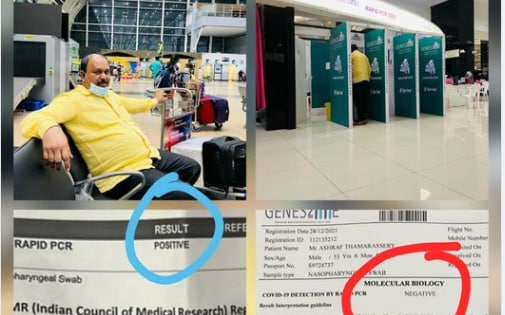 Ashraf Thamarassery at the airport.

Ernakulam: There have been widespread calls to amend the Covid-19 testing protocols at airports, after a lot of passengers have come out complaining about frequent false positive results and erratic testing methods.

Ashraf Thamarassery, a native of Kozhikode, shared a bitter experience on Facebook page after he got a ''false ' positive result at Thiruvananthapuram airport on his way to Sharjah on December 27. Following this, many people have come out disclosing their bitter experiences due to the erratic testing at airports.

Ashraff Thamarassey wrote on his Facebook page that he was not allowed to travel to Sharjah at Thiruvananthapuram airport after tested positive on December 27. “I was supposed to travel by an Air Arabia flight early in the morning on December 28. But at 11pm on the previous day, I was tested positive at the airport and denied permission to travel. I had tested thrice in various places till 24 hours ago and all the results were negative. I was pretty sure that the test result was wrong and requested the airport authorities to test again but the response was cruel and vulgar. They misbehaved with me and showed me the way out,” said Ashraff.

Usually, passengers are transported to nearby government hospitals or quarantine centers once they test positive. However, he was allowed to go freely out of the airport as he showed all the negative test results taken hours ago. Contrary to this, the officials of the airport told Mathrubhumi.com that he was taken in an ambulance (108) to the general hospital soon after tested positive.

“I rushed to Cochin airport after booking a ticket online on the Air India flight on the same morning at 10:10am. I was tested negative there and traveled safely to Sharjah,” added Ashraff.

I lost nearly one lakh rupees due to this ordeal, said Asharff. “Government should intervene in this issue as we follow an erratic system that lands people in predicaments,” added Ashraff.

Mathrubhumi.com found many comments, below the post of Ashraff, posted by people sharing the ordeals faced by them due to erratic testing methods at the airport. “Me, my wife and two children were traveling to Qatar last month. My wife and I were tested positive and denied permission to travel. The entire amount spent for tickets and tests went down the drain. However, when tested outside the airport, we were negative the very next day. This system is not for the welfare of the public but to destroy them,” said Moovin Mohammed, a resident of Kalikavu, Malappuram.

Another resident, Haneefa from Kumbadaje in Kasargod lost his job due to an erratic Covid-19 test result. “I was tested positive at Karipur airport a few months back and I could not travel. The test result was negative 24 hours ago but a few hours before the journey at the airport, I was tested positive. The very next day, I was tested again and the result was negative. I sent this negative report to my company in Abudhabi but I was denied a job,” said Haneefa.

Mathrubhumi.com spoke to Thiruvananthapuram airport manager about the issues faced by travelers. The lady who attended the call was reluctant to reveal identity and expressed her displeasure in communicating about the issue. “The said passenger, Ashraff Thamarassery must not have traveled. He is lying. First of all, he did not request the lab authorities to test again after he was tested positive.”

When asked more questions, she said, “I don't want to answer your questions as I am answerable only to my higher authorities.”

Mathrubhumi.com checked with the airport authorities in Cochin and found that he flew on the said day. IMA State President, Dr. Samuel Koshy, told Mathrubhumi.com that, “We cannot claim 100 percentage accuracy in any tests. Sometimes, the test results may go wrong. In such instances, passengers should be allowed to test again.”

Ashraff Thamarassery complained that he was not allowed to test again despite requesting several times. Public health expert Dr. SS Lal, said, “Very rarely, the tests show false positive results but false negative results are common. The reason can be many, either it could be due to contamination or some other error. If a person requests to test again, he/she should be allowed to do it.”

An official of Thiruvananthapuram airport told Mathrubhumi.com on condition of anonymity that they have no provision to test a passenger twice. If tested positive, he/she has to go in quarantine.

Thrissur: At a time when KSRTC is in a bad light over multiple reports on its various issues, an incident adding fuel to the fire occurred here on Friday ..

Thrissur: Karuvannur Cooperative Bank here issued an eviction notice to a woman in Thaliyakkonam near Irinjalakuda, for defaulting repayment of a loan ..

Kasaragod: A sixteen-year-old boy became a star of Neeleswaram by building a small buggy car using scraps. The natives were amused by the innovation of ..

Kochi: The owners of the demolished flats at Maradu have reimbursed only Rs 37.32 crore instead of Rs 120.98 crore. The owner of Holy Faith hotel, which ..

Kottayam: The ‘ love trap’ case in Kaduthuruthy here is turning more mysterious day by day. Police had earlier confirmed that all the youngsters who have ..