As per law, whenever a soldier is named as accused in any case, it is mandatory to inform the nearby regiment of the matter. Following which, a case will be registered by the military police. 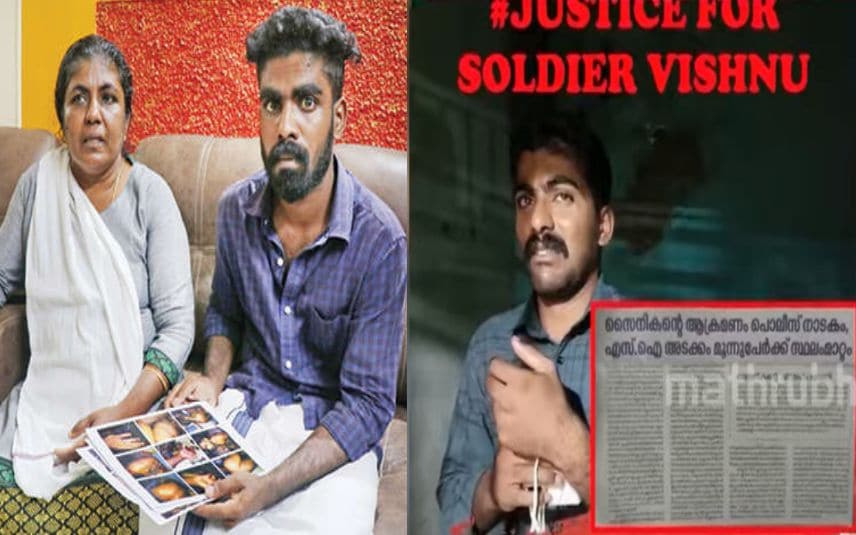 Kollam: The Indian army has intervened in the Kilikollur custodial torture following reports that the police failed to inform the army officials about the soldier’s arrest. The army has sought explanation from the chief secretary and the Director General of Police (DGP) in this regard.

Meanwhile, the soldier’s mother will lodge a complaint with Defence Minister Rajnath Singh alleging her son was booked under fake charges and brutally tortured in custody.

As per law, whenever a soldier is named as accused in any case, it is mandatory to inform the nearby regiment. Following which, a case will be registered by the military police.

In this case, the police should have informed the Pangode Military Station but they failed to do so. The regiment was informed about the arrest only after the custodial torture took place.

Since the police are also involved in the case, the army is planning to appoint an outside agency to probe the incident. Moreover, the case is to be heard at the district court.

Meanwhile, protests are rife against the custodial torture of brothers Vignesh and Vishnu at Kilikollur police station. As the incident stoked a controversy, the Kerala police on Thursday suspended four cops, including a circle inspector, and initiated a departmental probe against them.

Reportedly, the brothers were tortured for hours and remanded for 12 days. Vishnu’s marriage was also called off due to the arrest and accusations. The brothers revealed about the custodial torture before the magistrate when they were produced before the court.

Who all will find spot in Congress Working Committee? Debates gain momentum