They pushed open the university gates and shoved off the police officers to enter the campus. 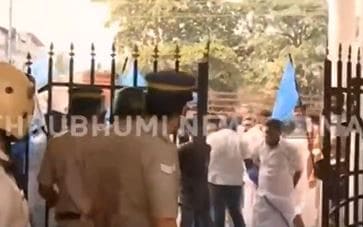 The KSU workers conducted a rally to the university and entered the campus on Saturday morning and trespassed into the office of the vice chancellor. They pushed open the university gates and shoved off the police officers to enter the campus.

The KSU workers continue to shout slogans in front of the office of the Vice Chancellor. The police are trying to remove some of the activists forcefully.

KSU, Youth Congress and Yuv Moracha workers had conducted strikes in front of the university in protest over the backdoor placements of the state government in the previous days also.