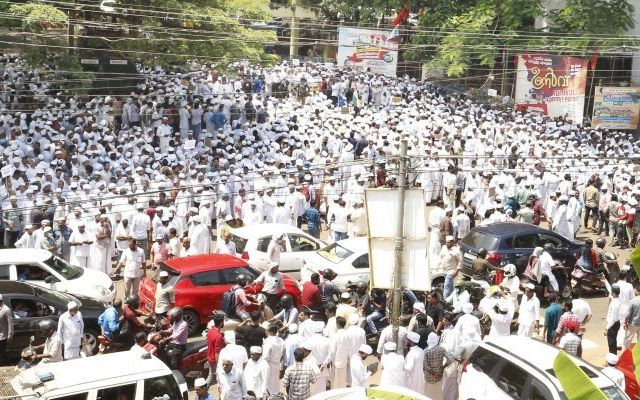 Rally of the Kerala Muslim Jamaat to the Kozhikode collectorate | Photo: Mathrubhumi/P Krishnapradeep

Malappuram: The massive rally organised by the Kerala Muslim Jamaat, the apex body of the AP Sunni faction’s organisations, has sent shockwaves across the LDF and especially, the CPM.

The Jamaat on Saturday took its followers to the street to protest against the appointment of Sriram Venkitaraman, who is accused of murdering journalist KM Basheer, as the Alappuzha district collector.

The protest rallies to the state secretariat and the Kozhikode collectorate were attended by its affiliate organisations like the Sunni Yuvajana Sangham (SYS) and Sunni Students Federation (SSF) and Sunni Jamiyyathul Mualimeen (SJM).

The AP faction has been close to the CPM and CM Pinarayi Vijayan for quite some time now. They had never expressed dissatisfaction on the decisions of the government in public so far. However, the murder of Basheer, who was the reporter of the oranisation's newspaper Siraj, is an emotional issue for the AP Sunnis. Basheer was also an active worker of the organisation. They have decided to let the party and the Front know that they cannot be taken for granted. The protestors raised powerful slogans against the state government.

The Jamaat worked hard at the ground level to ensure the success of the rally that was announced only five days ago. Besides, the SYS has reportedly invited opposition leader VD Satheesan to the I-Day celebrations in Kozhikode which otherwise would not have made news.

Former independent MLA of LDF from Koduvally, Karat Razak, termed the appointment of the IAS officer a thankless act towards the organisation that has always stood with the left.

The message has reached the leadership of the Left, undoubtedly. However, since CM himself has justified the appointment in his recent press conference as a 'normal administrative move', it is unclear if there will be any changes at this moment.