Neither the national secretary nor the chairman shall violate the guidelines of the party, said Kanam Rajendran in a press meet. 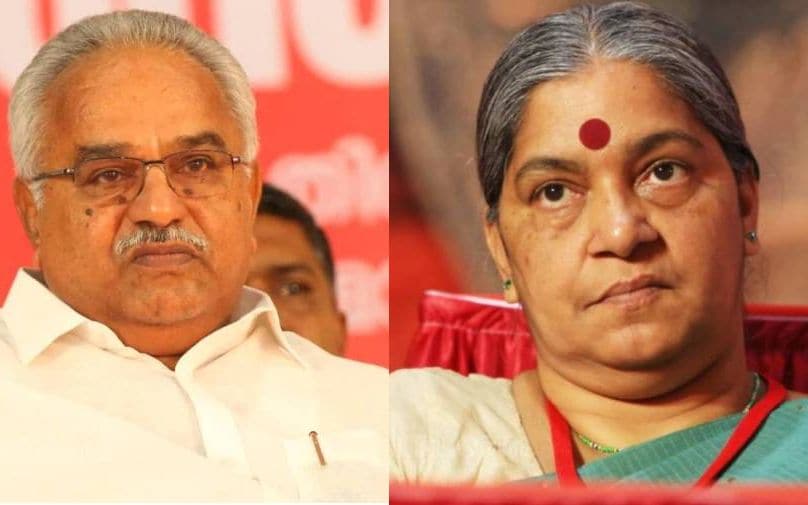 Thiruvananthapuram: CPI Secretary Kanam Rajendran slammed the party's national secretary D Raja for supporting Annie Raja over her remarks against Kerala Police. Kanam said that the response of D Raja backing the remarks of Annie Raja is not the decision of the national executive.

The national executive has already rejected the statements of Annie Raja. Hence, neither the national secretary nor the chairman shall violate the guidelines of the party, said Kanam Rajendran in a press meet.

The current divide in CPI has been caused by the public remarks of Annie Raja against the Kerala police. She had said that a RSS gang is being operated in the police force. However the CPI state leadership came up rejecting her comments.

Kanam Rajendran also expressed dissatisfaction on the matter and sent a letter to the national leadership pointing out that Annie Raja’s statement was made without consulting the state leadership.

Soon D Raja also intervened in the matter justifying Annie Raja. He had said that if there are any lapses on the part of police in any part of the country, either in Kerala or in Uttar Pradesh or somewhere else, it will be criticised.

By dismissing the claims of D Raja, Kanam said that CPI had earlier criticised even S A Danke, who was the chairman of the party. So no one will be exempted from criticism, if the party guidelines are violated. Kanam added that a national secretariat member has been entrusted to inform D Raja about the general opinion that emerged in the meetings of the state faction.