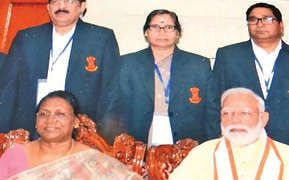 Alappuzha: Devakiyamma, who resides in a small village of Edappon in Nooranad here has a lot to share about Draupadi Murmu, who was elected as the 15th President of India. She was the private secretary of Draupadi Murmu when the latter was serving as the Governor of Jharkhand. Even after Devakiyamma retired from the service, both of them maintained their relationship through phone calls.

Devakiyamma said that Murmu showed special diligence in solving the issues of the poor. Devakiyamma, who was an officer at the irrigation department in Bihar was later appointed at the Raj Bhavan in Ranchi after the formation of Jharkhand in November 2000.

Though Devakiyamma retired from the service in 2011, her service has been extended each year later. Murmu was the first female governor of Jharkhand. In December 2020, Devakiyamma took retirement from her service and returned to Kerala for family reasons. Her husband, who was working in a private institution in Jharkhand also accompanied her.