After losing medal-winning painting on mothers, Anujath recreates it for admirers

Along with the painting, Anujath had also lost his mother Sindhu. Even before he won the medal, Sindhu died of ailments. Anujath drew the picture at the age of 13 portraying the hardships of many mothers in a single frame. 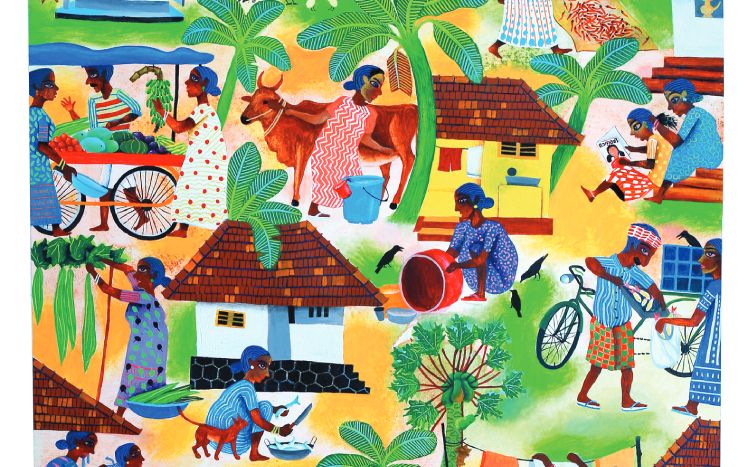 Thrissur: When the award-winning painting on mothers was lost, Anujath Sindhu Vinay Lal, a class 10 student, decided to recreate the painting for its admirers. The painting titled ‘My Mother and Mothers in the Neighbourhood’ had won a medal of the Shankar’s Academy.

But Anujath lost the original copy of the picture at the academy. He has only the digital copy of this and it was made the cover picture of the gender budget of Kerala Assembly.

Along with the painting, Anujath also lost his mother Sindhu. Even before he won the medal, Sindhu died of ailments. Anujath drew the picture at the age of 13 portraying the hardships of many mothers in a single frame.

Now he is recreating the painting for gifting it to Richard Claire, a Red Cross activist from Canada, who keeps requesting him for the painting on mothers. Richard wanted the painting after seeing a copy sent by a friend in Costa Rica.

Richard wants the same picture and is ready to pay whatever price demanded by Anujath. However, Anujath is drawing the painting in a canvas of 44-inch length and 33-inch width as gift for him. The painting will show mothers struggling to pluck jackfruit from tree. Like the first painting, there will be many mothers in a single frame.

Anujath’s father Vinay Lal said that many people from within and outside the country keep contacting them every day for the painting. A man named Edwardo Pinto from Brazil called saying he is waiting for the picture and is all set to pay the price, they said.

Silent painters: a group formed for a noble cause