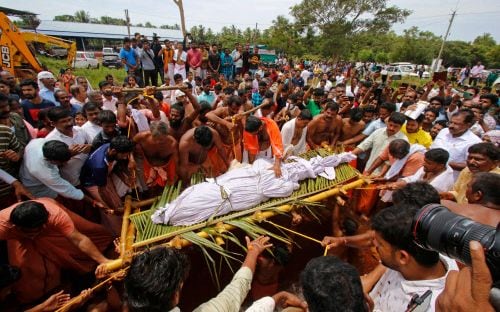 People carry the dead body of Babiya, a crocodile at Ananthapura lake temple, for its burial at the Ananthapadmanabha Swamy temple at Kasaragod in India's Kerala state on October 10, 2022 | Photo: AFP

Kasaragod: Babiya, the decades-old crocodile at Sri Ananthapadmanabha Swamy temple that died two days ago, was the most recent in a long line of lone semi-aquatic reptiles which lived in the temple lake for centuries and after its death, everyone is now hopefully waiting for the next one to appear as was the case in the past.

The secretary of the temple's Jeernodhara Samithi Ramachandra Bhat on Tuesday told PTI that the crocodile before Babiya was shot dead by the British military around the time of the Second World War.

"Sometime after that, Babiya appeared in the lake and over the decades she became a part of the family of everyone in the temple. We all are heartbroken. We could barely contain ourselves as we pulled the carcass out of the lake," he said.

"We believe another crocodile will now appear in her place. That is what has been happening for centuries. We have faith that it will happen again," Bhat, who has been part of the temple administration for over 30 years, added.

There are also plans to build a memorial for Babiya, but it requires the permission of the senior temple priests, Bhat said.

He further said the crocodile's presence in the lake around the Mahavishnu temple reminds one of the well-known Gajendra Moksha story in the Bhagavata Purana.

Legend has it that Gajendra, an elephant, was attacked by a crocodile which caught his leg and did not let it go till the pachyderm sought Lord Vishnu's help who decapitated the reptile.

However, Babiya was friendly and harmless to humans, Bhat said and recalled an instance when some kids fell on top of the crocodile in the lake, but the reptile did not harm any of them.

After devotees left for the day, the crocodile would also roam around the temple premises, he said.

The crocodile survived on the 'prasadam' from the temple, he added.

Babiya was found dead on Sunday at around 11.30 PM, after it did not turn up as usual on the previous day, temple officials had said.

The carcass was removed from the lake and kept for the public on Monday. Hundreds of people, including politicians, turned up for a last glimpse of the crocodile.

The carcass was buried in a pit near the temple that afternoon.

Tuesday also saw a large number of people visiting the temple and the burial site and paid their respects, Bhat said.

The Mahavishnu temple is located at Ananthapura near Kumbla in the northern Kerala district of Kasaragod. The temple is known as the 'moolasthanam', the original source of the Sri Anantha Padmanabha Swamy temple of Thiruvananthapuram, according to its website.

The temple's website claims that according to tradition, "the lake is inhabited by a single crocodile and in the memory of the very aged men the present crocodile happens to be the third one they have seen".

"When one crocodile dies another one inevitably appears in the lake and this continues to be an unexplained phenomenon," the website stated.

"There is no river or pond nearby where crocodiles exist. The crocodile is friendly and harmless to human beings," it added.