Anupama thanks Andhra couple for taking care of baby; says she will raise him as a good human 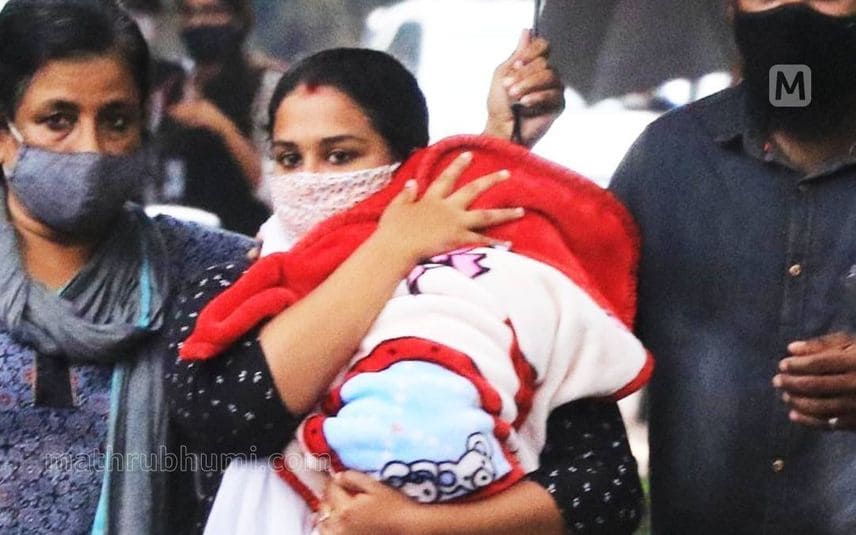 Anupama coming out of the court carrying her baby | Photo: G Binulal | Mathrubhumi

Thiruvananthapuram: One year of waiting and weeks long tough legal battle, protests and controversies came to an end as Anupama S Chandran finally held her baby boy in her arms soon after she stepped out of a court complex here along with her partner Ajith on Wednesday afternoon.

Reacting to the media after receiving the child, Anupama said that she is very happy. She added that she is grateful to all those including the media who supported her in the battle to get the baby back. She addressed the media at the protest venue and returned to a friend’s house.

“I will continue my protest till action is taken against those who took away my baby without my consent. But it is difficult to sit in the protest venue carrying the little child. So, I will change my way of protest,” she said.

“The baby is getting familiar with us. We are not leading a luxurious life. We only want to raise him as a good human being. I am so grateful to the Andhra couple who took care of my son for about three months. They looked after him like their own child,” she stated.

Anupama got custody of the baby whom she last saw when the infant was three days old, after a family court ordered that the child be handed over to his biological parents. The child had been under the care and protection of his adoptive parents in Andhra Pradesh till last Sunday.

The development comes a day after the DNA tests on the baby, Anupama and Ajith at the Rajiv Gandhi Centre for Biotechnology (RGCB) established the couple as the parents of the child. Emerging from the court complex, the family travelled by car to the site of Anupama's protest these last few days, in front of the Kerala State Council for Child Welfare (KSCCW) headquarters here.

When the court began its proceedings at 2.30 pm, the Child Welfare Committee (CWC) submitted before it, the results of the DNA test. During the one-and-a-half hour long proceedings held in the chamber of the judge, the baby, who was in the custody of CWC at the Nirmala Sishu Bhavan, was produced before the court following its directive.

The court then directed that the baby be medically examined and after completing all legal formalities, ordered the CWC to hand over the child to his mother. The court had posted the matter for November 30, but it preponed the hearing to Wednesday after the government pleader appealed to hand over the baby to its parents at the earliest.

Anupama (22) and her partner Ajith had been protesting in front of the KSCCW office at Thycaud here for some days, demanding to get their child back. The woman's allegation that her child was forcibly taken away from her by her father, a local CPI(M) leader, triggered a political controversy following which the government had ordered a departmental probe into the incident.

Anupama had accused her parents of forcibly taking away her new-born child from her soon after its birth a year ago and alleged that though she had complained about it to police several times since April, but they were reluctant to register a case against her family members.

However, the Peroorkkada police here said a case was registered against six people -- her parents, sister, sister's husband and two of his father's friends -- and that the delay occurred as they were awaiting legal opinion.

Anupama and Ajith formally marry in presence of their son