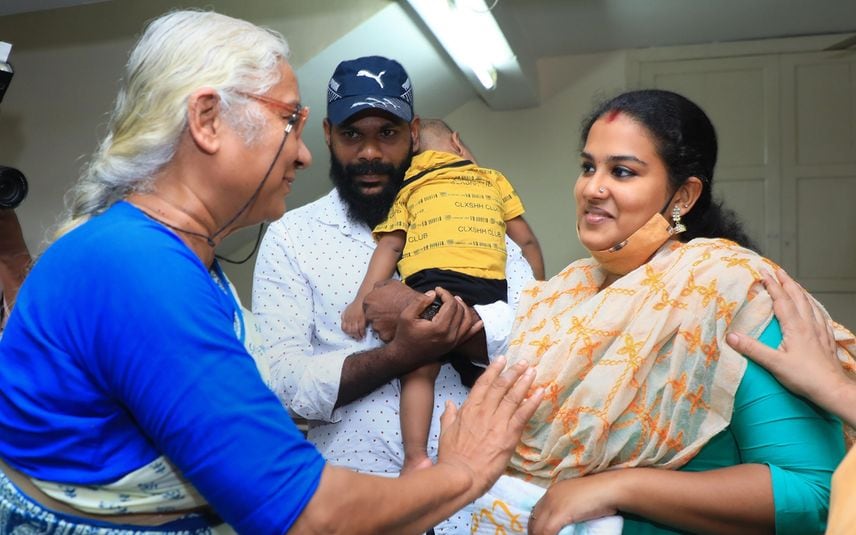 Social activist Medha Patkar with Anupama and Ajit, a couple that fought for the custody of their child who was allegedly illegally put up for adoption by state government agencies, in Thiruvananthapuram, Saturday

Thiruvananthapuram: Activist Medha Patkar, who came calling on Anupama who has waged a war to get back her baby which was given for adoption by a group with full 'support' from two-state run agencies, assured her of all support in her further endeavours.

Patkar said Kerala Chief Minister Pinarayi Vijayan should explain as to how this incident happened, as she assured Anupama of her full support to ensure punishment for the wrongdoers.

Patkar added that Anupama has suffered a lot and this should never have happened, especially when there are two state agencies that are responsible for this.

Anupama told her that she will continue her protest till the wrongdoers at the Kerala State Council for Child Welfare (KSCCWC) and the Child Welfare Committee are punished.

Four days after she delivered her baby boy in October last year, first her parents forcibly took her baby away and then the two state-backed agencies -- KSCCWC and the CWC -- in violation of all basic rules gave her child to adoptive parents in Andhra Pradesh.

Following a huge media blitz, which began in October, even the local family court which was to have formalised the adoption, stayed it and the baby was brought from Andhra Pradesh and given to Anupama and Ajith last month, after a DNA test revealed that the baby was theirs.

Incidentally, ever since the controversy surfaced, the otherwise vocal Chief Minister Vijayan, especially when it comes to women and child's rights, has not met the media, nor has he said a word on the matter till now. IANS