Aadhaar and voter ID to be linked

The Election Commission of India (ECI) had been pushing for multiple cut-off dates to allow more eligible people to register as voters. 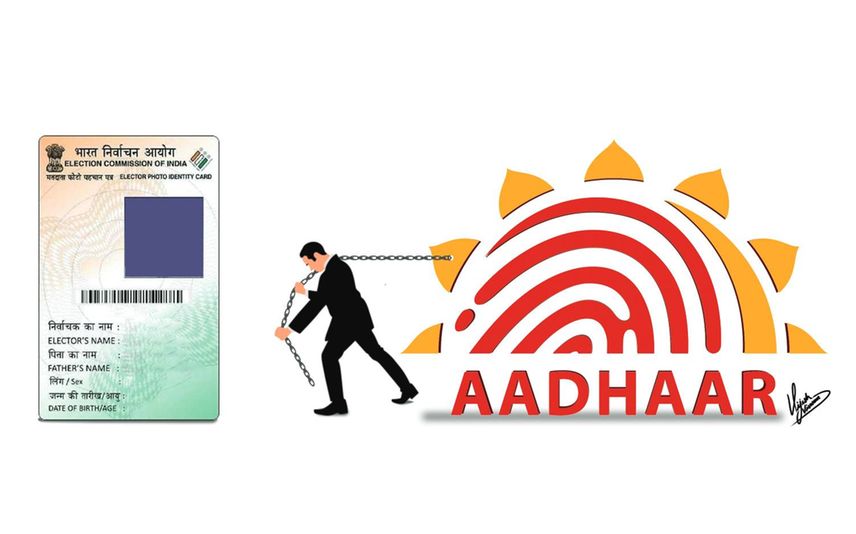 New Delhi: The Union Cabinet on Wednesday is learnt to have cleared a bill on electoral reforms, including the one to link electoral roll with Aadhaar on a voluntary basis to root out multiple enrolments.

According to the bill, the electoral law will also be made “gender neutral” for service voters.

An army man's wife is entitled to be enrolled as a service voter, but a woman army officer's husband is not, according to provisions in the electoral law. But this may change once the bill gets Parliament's nod.

The poll panel had asked the law ministry to replace the term ‘wife' with ‘spouse' in the provision in the Representation of the People Act related to service voters.

Another provision of the proposed bill will allow the youth to enrol as voters on four different dates every year. As of now, those turning 18 on or before January 1 of every year are only allowed to register as voters.

The Election Commission of India (ECI) had been pushing for multiple cut-off dates to allow more eligible people to register as voters.

Currently, for an election to be held in a particular year, only an individual who has attained the age of 18 years as on January 1 of that year or before is eligible to be enrolled in the voters' list.

The EC had told the government that the January 1 cut-off date set for the purpose deprives several youngsters from participating in the electoral exercise held in a particular year.

Due to only one qualifying or cut-off date, a person attaining the age of 18 years on January 2 cannot be registered. Therefore, a person who turns 18 after January 1 will have to wait for the next year to get registered.

The law ministry had recently told a parliamentary panel that “it is proposed to amend section 14(b) of the Representation of the People Act to insert four qualifying dates (or cut-off dates) — January 1, April 1, July 1, and October 1 — of every year”.

In March, then law minister Ravi Shankar Prasad had told Lok Sabha in a written reply that the poll panel has proposed to link electoral roll with the "Aadhaar ecosystem" with a "view to curb the menace of multiple enrolment of the same person at different places".

He said this would require amendments to the electoral laws.

The minister had said the poll panel has informed that it has taken multiple measures for the security and the safety of the electoral roll data platform.

"Electoral roll database system does not enter into the Aadhaar ecosystem and the system is used only for the authentication purpose keeping a tight air-gap between the two systems. These measures effectively prevent theft interception and hijacking of the voter system," Prasad had said.

The poll panel has been pressing the government to amend provisions of the Representation of the People Act allowing EC to seek Aadhaar numbers of those applying to be voters and those who are already part of the electoral rolls.

According to the EC proposal sent in August 2019, the electoral law should be amended to empower electoral registration officers to seek Aadhaar number of existing voters as well as of those applying to enrol themselves in the voters' list.

In August 2015, a Supreme Court order on Aadhaar had put the brakes on the EC's project to link UIDAI (Aadhaar) number with voters' electoral data to check multiple entries in electoral rolls.

The poll panel was then collecting Aadhaar number as part of its National Electoral Roll Purification and Authentication Programme (NERPAP).

Seeking to check multiple entries in electoral rolls and to make them error-free, the EC had embarked on an ambitious project to link Aadhaar numbers with electoral data.

Since the Supreme Court order makes it clear that sanction of law is required to collect Aadhaar number, the commission has proposed changes in electoral law, a poll panel functionary had explained.

Yet another proposal cleared on Wednesday will allow Election Commission the powers to take over any premise for the conduct of elections.

There were some objections to taking over schools etc during the period of elections.

The bill on these reforms cleared on Wednesday are likely to be introduced in the ongoing Winter session.

Those aged above 17 but not yet 18 can now register in advance to become voters: EC