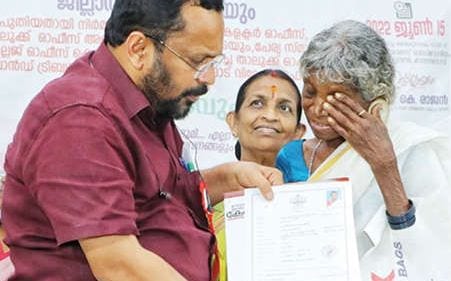 Mananthavady: The state government distributed 802 title deeds (pattayam), at a district-level fest held in Wayanad on Wednesday. Minister K Rajan revealed that 1,739 title deeds were disbursed in the district during the second term of the Pinarayi government and he opined that it reflects the willpower of the government. The dreams of several poor households to gain the rights over the land in which they reside over years were fulfilled at the fest.

By this, the government could resolve the complaints raised by the people at Narikkallu, Vellara and Parison Estate in Mananthavady taluk and the issues associated with Cheengeri Tribal Extension Scheme to a certain extent.

The title deeds were distributed to 174 families in Narikkal and Vellara. The surplus land acquired from the Parison Estate and Industries Private Limited was disbursed among 161 households and 100 beneficiaries received title deeds in Cheengeri at the fest held on Wednesday.