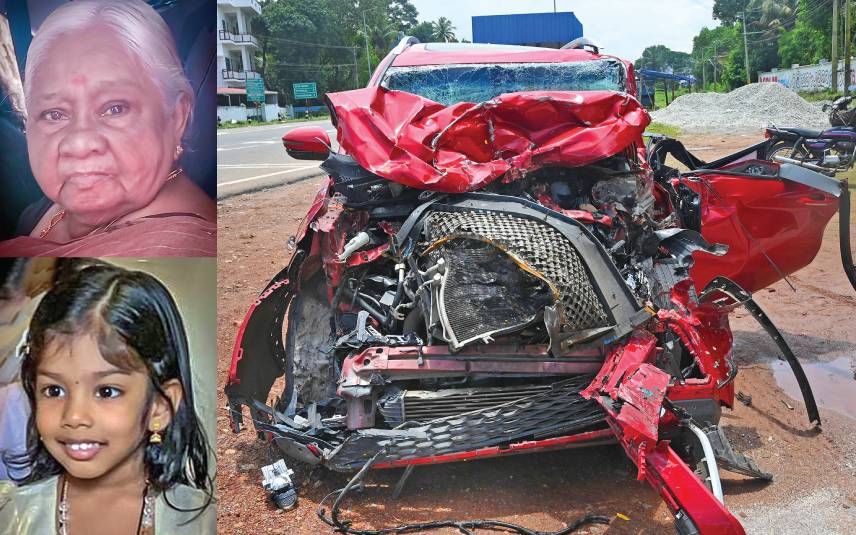 Krishnakumari, Janaki, car that was involved in the accident

Kollam: A horrific accident near Mukkada bridge here following a car and lorry collision left a 3.5-year-old and her great grandmother dead. The family hailing from Petta in Thiruvananthapuram was returning after a visit to the Guruvayur temple. The accident took place around 1 am on Tuesday.

Krishnakumari (82) and her great-grandchild Janaki were killed in the accident.

The family including, Krishnakumari, her son retired sub registrar Jayadevan, his wife Sheeba, his daughter Krishnagadha, son-in-law Sudheesh and others set off from Thiruvananthapuram to Guruvayur in two cars last Saturday.

The family arrived at Ernakulam on Monday morning and set off to Thiruvananthapuram only by night. Sudheesh and Krishnagadha were travelling in different cars. As the cars were passing through Kollam bypass, a lorry coming in the opposite direction rammed into the car travelling in the front. The lorry was heading from Thiruvananthapuram to Ernakulam. The front portion of the car was completely ruined following the crash.

Krishnakumari, Jayadevan, Sheeba, Krishnagadha and Janaki were admitted to a private hospital in Kollam with the help of locals and Shakthikulangara police. Krishnakumari and Janaki passed away on Tuesday morning.

Sudheesh and Krishnagadha work at a construction company in Thiruvananthapuram. The bodies were shifted to Parippally Medical College. Janaki will be cremated on Wednesday noon at Sudheesh’s house in Chathannoor.

Man, son killed as car falls into well in Kannur