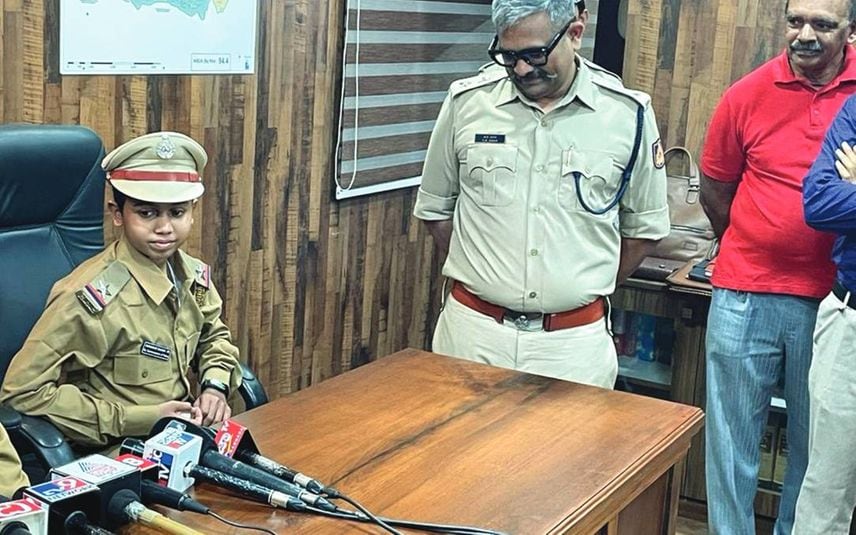 Mohammed Salman in uniform at Koramangala police station in Bengaluru

Bengaluru: Ninth standard student Mohammed Salman became a police officer in Bengaluru for a day. Salman was fulfilling one of the biggest dreams of his life as he sat in the Deputy Police Commissioner’s chair, giving instructions through his walkie-talkie and conversing with the media persons and police officers present there. The teachers of Sree Kumaramangalam Public School in Kumarakom where Salman is enrolled shared the picture on social media.

Salman affected by Thalassemia arrived in Bengaluru last month for treatment at Narayana Health City here. He got in touch with the workers of the ‘Make-A-Wish Foundation’. This non-profit organisation works to fulfil the wishes of children with clinical illnesses.

Salman knows in his heart that becoming an IPS officer is his one true wish. When the workers of the organisation called and asked Salman to get ready to assume charge at the Koramangala police station, he couldn’t believe their words.

The organisation arranged the uniform and cap of the IPS officer. Salman arrived at the police station in full uniform by 11 am. He was received by the police officers, including the Deputy Commissioner of Police CK Baba. He was briefed about the procedures at the station. Karnataka native 14-year-old Mithilesh too got the opportunity to be an IPS officer for a day.

Salman is the son of Kottayam native Mujeeb Rahman and Jarimol.

Trains to Kerala running full prior to Christmas-New Year vacation