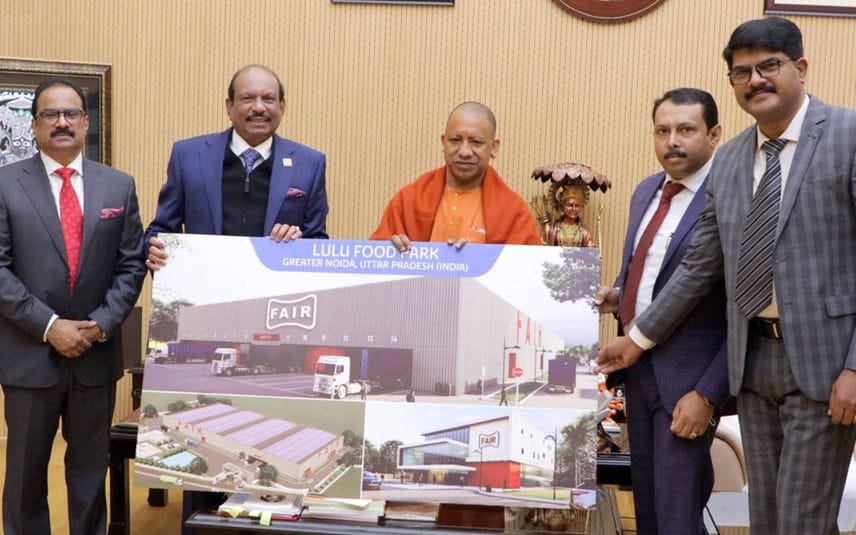 The company will set up 100 per cent export-oriented food and agri-produce processing park in Greater Noida.

At a formal function held at Uttar Pradesh Chief Minister Yogi Adityanath's office in Lucknow, the land allotment order for 20 acres was handed over to Lulu Group Chairman Yusuffali M A, the company said in a statement.

The Lulu group said "Rs 500 crore will be the initial investment in setting up of this state-of-the-art unit".

Yusuffali briefed the CM about the various details of this world-class facility, which will support the agriculture sector in the state.

The Lulu group will procure and export about 20,000 tonnes of local fruits and vegetables to their hypermarkets around the world.

"Yogi Adityanath unveiled the prototype of the proposed facility, which is expected to start operations in eight months with a turnover of Rs 3,000 crore," the statement said.

Yusuffali said the group will be directly sourcing from the farmers of Uttar Pradesh, ensuring better revenues to them.

He also informed that the Rs 2,000-crore Lulu Mall with the largest hypermarket is in the final stages of completion and will be inaugurated in the first week of April 2022.

The 22 lakh square feet shopping mall at Amar Shaheed Path will have 220 national and international brands, a family entertainment centre, 3,000 capacity food court and restaurants, an 11-screen PVR cinema with a total parking capacity of 3,000 including a separate parking building.

"We had to delay the project by one year due to the COVID-19-related challenges, but I am upbeat about the current business scenario and the pro-development vision of UP government and I am sure this will be a landmark shopping and leisure destination in this part of India," he said.

Once completed, the Lulu Mall at Lucknow will employ over 5,000 directly while another 10,000 people will get indirect employment.

The mall at Bengaluru is not owned by the Lulu group but it is managing and operating the property.

Earlier this month, the Lulu group announced an investment of Rs 2,000 crore near Ahmedabad to set up a modern shopping mall.

The construction is expected to begin in the first quarter of 2022 and be completed within 30 months.

Apart from a shopping mall, the Lulu Group will also set up food processing and logistics centres in Baroda and Surat, respectively, which will facilitate exports.

The Lulu group currently has 220 hypermarkets and shopping malls in the Middle East, Egypt, India, Malaysia and Indonesia with a global workforce of over 57,000 employees.

New Delhi: After two days of talks with the top brass of Congress, poll strategist Prashant Kishor is likely to join the main Opposition party in the next ..

Kokrajhar (Assam): Gujarat MLA Jignesh Mevani, arrested by the Assam Police in the western state over a tweet, had claimed in the purported post that Prime ..

British Prime Minister Boris Johnson arrived in Ahmedabad on Thursday morning to start his India visit, and was accorded a grand welcome at the Ahmedabad ..