Yechury writes to CEC, says proposed amendment on election promises should be withdrawn 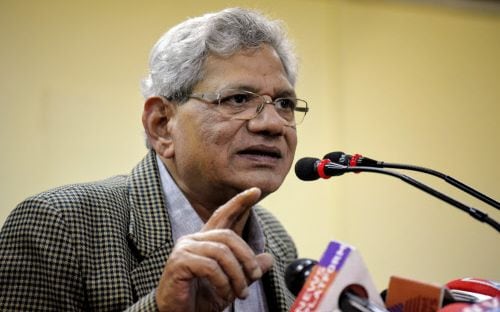 New Delhi: Communist Party of India (Marxist) general secretary Sitaram Yechury has written to the Chief Election Commissioner (CEC) Rajiv Kumar saying that EC's move regarding the amendment to the Model Code of Conduct on promises made in election manifestos was unwarranted and the proposal should be withdrawn.

Yechury said CPI-M is of the considered opinion that the proposed amendment is uncalled for and should not be proceeded with.

He said Article 324 of the Constitution mandates the Election Commission with the superintendence, direction and control of elections and does not provide for the panel to regulate or evaluate the policy pronouncements and promises of welfare measures of political parties to the people at the time of an election.

"The proposed amendment to the Model Code of Conduct and the proforma for disclosure of the details of poll promises and their financial implications will get the Commission involved in political and policy matters which do not fall under its purview," the letter said.

It said the proforma enters into areas such as quantification of the financial implications of the promises made and the fiscal sustainability of the additional resource-raising plan for fulfilling the promises.

"These are political and policy issues and there can be divergent views of what constitutes "fiscal sustainability,"' the letter noted.

Yechury said the Election Commission had submitted an affidavit to the Supreme Court in April this year in a case being heard for reconsideration of the Subramaniam Balaji judgment and submitted that it cannot regulate State policies and decisions which may be taken by the winning party when they form the government.

"This was a correct and valid stand taken by the Commission. It is, therefore, surprising that the Commission seems to have had a change of mind and proposes to be more intrusive into a sphere which pertains to political parties and the people," the letter said.

It said the Supreme Court bench headed by the then Chief Justice of India, N V Ramana, which heard the petition asking for a reconsideration of the judgment given in the Subramaniam Balaji case, decided on August 26, 2022 that the matter be heard by a three-member bench to be decided by the new CJI.

"So, the matter of election promises and the issue of `freebies' etc. are still pending before the Supreme Court. In such a situation, the Commission's initiative to amend the Model Code of Conduct by introducing a proforma, which infringes on the rights of political parties to address people's concerns and offer them policy and welfare measures, is unwarranted.

"The CPI(M), therefore, wants the Commission to withdraw the proposal to amend the Model Code of Conduct," the letter said.