The river had breached the danger mark of 205.33 metres around 4 pm on Friday following heavy rain in the upper catchment areas, prompting authorities to evacuate around 7,000 people from low-lying areas. 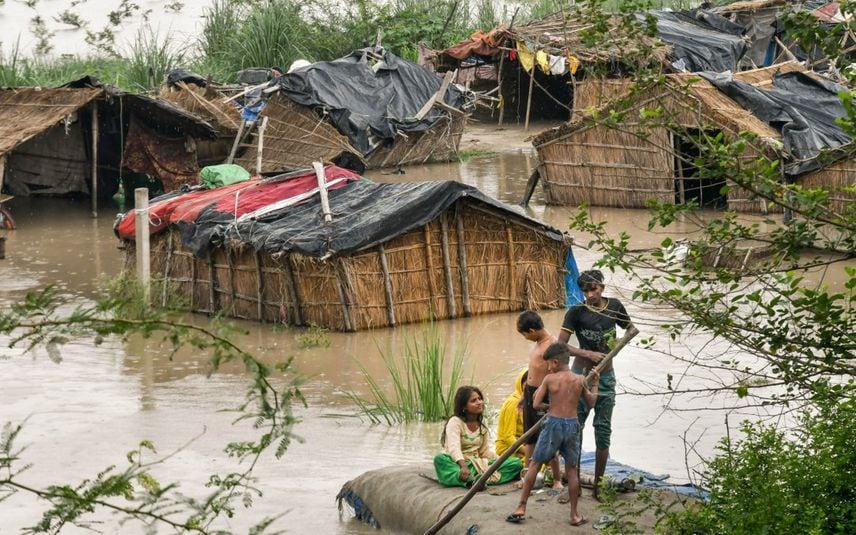 Houses belonging to slum-dwellers partially submerged in the floodplains of the swollen Yamuna river. Photo: PTI

New Delhi: The water level in the Yamuna receded below the danger mark of 205.33 metres in Delhi on Sunday and is likely to dip further even as Chief Minister Arvind Kerjriwal appealed to people to avoid going towards the river banks.

The river had breached the danger mark of 205.33 metres around 4 pm on Friday following heavy rain in the upper catchment areas, prompting authorities to evacuate around 7,000 people from low-lying areas.

The water level fell below the danger mark around 2 am on Saturday.

CM Kejriwal appealed to people to avoid going towards the banks of the river.

"We have made adequate arrangements for the people living near Yamuna. Cooperate with the government and administration. We are monitoring the situation and are ready to deal with any situation," he tweeted.

Delhi minister Kailash Gahlot said: "In view of the rising water level of Yamuna, all the agencies concerned have been put on high alert. There is an appeal to the people to stay away from the river. We are monitoring the situation under the leadership of CM Arvind Kejriwal. Camps have been set up for the displaced, where necessary arrangements have been made for their accommodation and food."

A flood alert is declared in Delhi when the discharge rate from the Hathnikund Barrage in Haryana's Yamuna Nagar crosses the one lakh-cusecs mark. People living near the floodplains and in flood-prone areas are evacuated then.

"Around 37,000 people who live in Yamuna floodplains and low-lying areas in Delhi are considered vulnerable to flooding.

"People evacuated from low-lying areas in the floodplains have been shifted to temporary structures like tents and permanent buildings like schools in safer areas," an official said.

Principal Secretary Revenue Khilli Ram Meena said the overflowing Yamuna affected low-lying areas near the river in northeast, east and southeast Delhi and around 7,000 people had been shifted to higher ground.

"Around 5,000 from east Delhi, 2,000 from northeast Delhi and 500 from southeast Delhi had been evacuated. People in north, central and Shahdara districts did not face any major problem," he said.

The senior official said the situation was under control and there was no need to evacuate more people.

An official in East Delhi said people living in low-lying areas close to the river had been moved to tents erected near the Commonwealth Games Village, Hathi Ghat and on Link Road.

The Delhi flood control room reported a discharge rate of around 7,000 cusecs from the Hathnikund Barrage in Haryana's Yamuna Nagar at 10 am.

One cusec is equivalent to 28.32 litres per second.

Normally, the flow rate at the Hathnikund barrage is 352 cusecs, but the discharge increases after heavy rainfall in the catchment areas. The water discharged from the barrage normally takes two to three days to reach the national capital.

According to the India Meteorological Department, "widespread rainfall with isolated heavy rain" is likely in Himachal Pradesh, Uttarakhand and Haryana on August 14 and 15.

Last year, the Yamuna river breached the danger mark on July 30 and the water level at the Old Railway Bridge had risen to 205.59 metres.