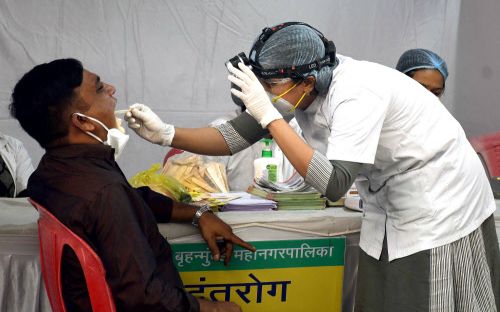 Mumbai: Two more cases of Omicron variant of coronavirus have been reported in Maharashtra's Mumbai on Monday, taking the total tally of the new COVID-19 variant in Maharashtra to 10 and the total number of infections in the country to 23.

A 37-year-old man who arrived in Mumbai from South Africa and his 36-year-old female friend who landed in the city from the United States have both tested positive for Omicron.

As per the Maharashtra government, both the patients displayed no symptoms and were vaccinated with Pfizer's COVID-19 vaccine.

Until now, five high-risk and 315 low-risk contacts of the patients have been traced. Further tracing is currently underway, the state government said.

The first two cases of Omicron variant were reported in the country in Karnataka, followed by one in Gujarat's Jamnagar and then another in Maharashtra's Dombivili.

On Sunday, seven cases were reported in Maharashtra's Pune district, of which six belonged to the same family.

In Jaipur, nine cases of the Omicron COVID variant were confirmed.

On December 5, Delhi reported its first case of Omicrona man who arrived from Tanzania was found infected with Omicron admitted to the Lok Nayak Jai Prakash Narayan hospital in the national capital.

The new variant of COVID-19 was first reported to the World Health Organisation (WHO) from South Africa on November 25. As per the WHO, the first known confirmed B.1.1.529 infection was from a specimen collected on November 9 this year.

On November 26, the WHO named the new COVID-19 variant B.1.1.529, which has been detected in South Africa, as 'Omicron'. The WHO has classified Omicron as a 'variant of concern'. (ANI)